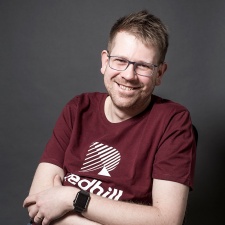 In this speaker spotlight we caught up with Miloš Jeřábek, Co-founder & Executive Producer from Redhill Games. Milos has over 15 years of experience in game development working in both creative and production roles. He has worked across Europe in multicultural teams and environments on major blockbusters such as World of Tanks, Quantum Break, and Mafia 2.

In 2018 Milos co-founded Redhill Games, a team of seasoned industry veterans based in Helsinki, Finland. He is the Executive Producer and hard at work on their first title, a tactical free-to-play shooter on PC. Having lead both small 10 person teams up to large teams of over 500 developers, Milos has unique insight into the industry and how games are made.

At Pocket Gamer Connects Helsinki 2019 he'll be presenting a session entitled Motivational Drivers in People Management, as well as being part of a panel discussion called It Takes a Village: Making Teams Work.

What does your role involve?

I'm responsible for the game vision and development of our first title.

For the passion that lies in the creative minds.

What advice would you give to anyone looking to get into the industry?

Do you have the inner fire that drives you forward? The fire that never spots and keeps you going? That makes you want more? Then just listen to it and it will lead you where it should.

A lot. I started more than 15 years ago, in times where mobile gaming was almost non-existent, games were only for young people and GaaS hadn't been even thought of yet.

Many things changed, including myself. I switched roles from creative to production, seen both worlds and developed games on many platforms. This is the biggest beauty of our industry: it never stops evolving.

Which part of Pocket Gamer Connects Helsinki are you most looking forward to?

Listening to fellow developers and sharing our knowledge.

PGC Helsinki: Cuneyt Unar will be hosting a session about using blockchain technology in mobile gaming

PGC Helsinki: Zsuzsa James will be on a panel discussing funding strategies at the show