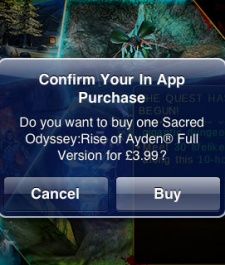 February 6th, 2011 - 11:02pm
By Jon Jordan, Contributing Editor
While the launch weekend doesn't count as confirmation of the eventual success or failure of a longterm publishing strategy, it seems that Gameloft's try-before-you-buy release of its iPhone game Sacred Odyssey: Rise of Ayden hasn't immediately caught the audience's imagination.

Released on Thursday, the title - loosely based on Nintendo's Legend of Zelda games - is free to download and play for the first 15 minutes.

Tracking its performance on the US App Store charts suggests Gameloft might have been better going with its standard mix of paid and free Lite versions however.
Sacred Odyssey: Rise of Ayden peaked #16 on the Free iPhone games chart, and #32 on the US iPhone Top Grossing chart. And at time of writing, it was slipping back on both.

It will be interesting to see if Gameloft decides to tweak the model, or the price in the coming weeks.