February 19th, 2013 - 05:00pm
By Jon Jordan, Contributing Editor
Android has provided an open ecosystem for the smartphone industry, and that's what US outfit Agawi is looking to do with its True Cloud service for cloud gaming.

Combining all the elements required for a successful streaming game service, Agawi has announced it's partnered with the likes of Nvidia, Blue Box, PEER 1 and XO Communications to ensure an integrated collection of hardware, servers and service providers.

All developers need to provide is a PC version of their game that will then be made available to tablets, smartphones, PCs and smart TVs.

"When we launched OpenFeint, we handled the server-side and let developers get on with making games. That's the plan with True Cloud," explains Peter Relan, who funded Agawi (and OpenFeint) through his YouWeb incubator.

"We're removing the complexity. All developers have to do is provide us with a PC version of their game. There's no APIs or SDK to support," he adds.

True Cloud will be made available through Agawi's CloudPlay service. Indeed, Relan says Agawi is already testing 40 games and has two content partners signed up.

Originally launched under the name iSwifter in 2011, Agawi has been streaming PC games, originally to iOS devices, then expanding to smart TVs, as well as Android and Windows tablets.

To-date, it says it's streamed over 250 million minutes of gameplay to over four million gamers, but now has switched from a consumer-facing service to what it calls a 'business-to-business-to-consumer" operation. 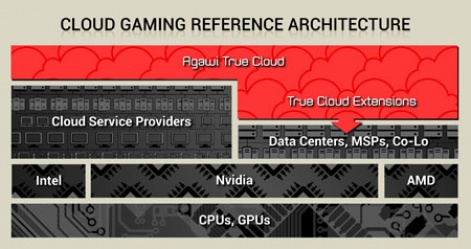 "The previous iterations of cloud gaming have relied on piecemeal efforts and proprietary designs," said Agawi co-founder Rajat Gupta of its new approach.

"True Cloud requires only one version of a game to ever be written in the cloud, and we can make it accessible on any post-PC era device-meaning that one game can reach an exponentially larger audience on tablets, phablets, TVs and next generation game devices like Project Shield."

A big part of the announcement is Agawi's hook up with Nvidia, which brings the company's GRID GPU hardware into play.

Each GRID server consists of up to 12 parallel GPUs, which are deployed in 10 servers per rack. The resulting 120 GPU rack can handle up to 240 concurrent gamers or 2,400 subscribers.

"The 12 GPUs found inside GRID K340 servers are designed to enable the smooth, seamless interactive experience of a high-performance gaming PC on mobile devices and unlock the cloud as the universal vehicle for fast and economical gaming."

Companies such as Blue Box (data centers), PEER 1 (cloud-hosting services) and XO Communications (service provision) aren't as well known as Nvidia, but they're equally important in terms of True Cloud's scalability - the issue that resulted in cloud-gaming pioneer OnLive running out of money.

Indeed, by integrating across multiple service providers, Agawi points out that it's increasing the number of streams that will be available to gamers, ensuring a high-speed gaming experience.