It's released its Yandex.Store, an on-device store for Android apps and games, which launched with over 50,000 titles.

High profile apps on the store include Foursquare, Cut the Rope, Pudding Monsters and Angry Birds.

As you'd expect initial support has come from Russian companies such as operator MegaFon, which launched its white label version of the store - called GetUpps! - in February. 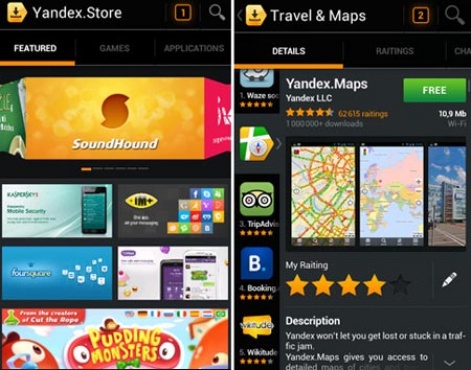 Yandex expects that the majority of traffic from Yandex.Store will come as it's pre-installed on devices, but consumers can also directly download the store if they want to.

In terms of developer getting content onto the store, it's a similar self-serve process to Google Play, although Kaspersky Lab checks all submissions for malware.

The reason for Yandex's move is that Russia's largest - and the world's fourth largest - search engine wants to undercut Google's market share for search, especially in regions such as Russia, Turkey and Asia.

Yandex.Store enables it to do this as it's free for companies to integrate and rebrand, and Yandex is prepared to share part of the 30 percent of app store transactions it collects with operators and/or OEMs in order to boost its wider search business.

Indeed, it hopes some handset manufacturers will remove Google Play from their devices, completely replacing it with Yandex.Store.

As well as the store and search, Yandex also offers services such as maps and its own integrated billing solution.

You can find out more from the Yandex.Store website.

Chart of the Week: Similarities and differences of the Russian mobile market

Sailfish to set sail: Jolla to launch on 27 November

From Russia with love: Jolla taps up Yandex to power app store