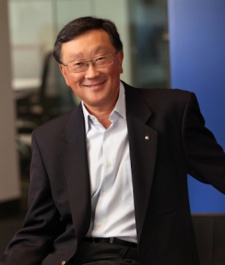 The move comes in response to the cool reception of the touchscreen-only Z10, which struggled to find an audience amongst consumers and ultimately lead to a $1 billion loss.

While Chen was mum about the future of games on the BlackBerry ecosystem, the lack of touchscreen controls will prohibit most mobile developers from considering BlackBerry as a viable platform.

Go to what you know

The move to abandon touchscreens (and games) follows BlackBerry's decision to part ways with Alicia Keys, who former CEO Thorsten Heins hired to serve as BlackBerry's global creative director for the Z10.

Speaking broadly on the future of the company, Chen made it abundantly clear that the Canadian tech titan would not target the consumer market again any time soon.

"AT&T and a number of other major carriers have agreed to help us on the enterprise space" CEO Chen said in an interview with Bloomberg's Jon Erlichman.

"It's important for me to focus the company on enterprise, on security, on productivity, and on communications." Chen concluded.