May the force be with FUUU 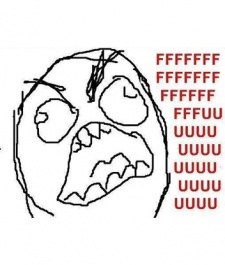 Wooga's Florian Steinhoff opened his talk at GDC 2014 in San Francisco on the performance of Jelly Splash with five simple words: "Hate is a powerful emotion."

While many of us think to avoid engendering hatred with our games, Steinhoff recommends that hate should actively be embraced.

"If someone hates your game, they feel passionately about it, and so they maybe love it a little bit too," he detailed.

With this counterintuitive philosophy laid out, Steinhoff went on to give a list of best practices on how you can turn frustration into a driving force of player engagement and retention.

When Steinhoff laid out the difficulty curve of Jelly Splash, he showed a collection of difficulty models Wooga tried but ultimately found unworkable.

This collection boasted the standard 45 degree incline, an exponential "hockey stick", and a curvy variant on both. In the end, Wooga opted for a spiky line with multiple sharp peaks and valleys.

The spikes represent Blocking Levels or - as Steinhoff described them - "crazy difficult levels" which are used to slow players down. Unfortunately, these levels engender a lose rate of "up to 95 percent".

To compensate for these, Wooga sprinkled in Relief Levels - the valleys - which allow players to recover from Blocking Levels and amps up their confidence to try again.

The third level type essential to Jelly Splash's success is the Build Up level, which are increasingly difficult stages on the slopes leading up to the spikes.

Steinhoff stressed, however, that developers shouldn't save spikes - Blocking Levels - until late in the game. In fact, he advocated confronting a player with one in the first play session to reinforce them with a loss.

"Players need to lose, and lose early on - otherwise they'll think it's a game for kids and will put it down and never play again."

The key to building frustration with Blocking Levels is to aim the right FUUU factor, named after the now-infamous Rage Guy meme.

FUUU factor, as Steinhoff explained it, is best described in a simple equation:

# of tries until won / # of times you almost won a level.

Put another way: the more frustratingly close calls, the lower the FUUU factor - and a lower FUUU factor leads to a more motivated, enraged, and engaged player.

That level will be viewed as more frustrating, sure, but that frustration is sticky.

"Don't be afraid to frustrate the players, listen to the data, and ignore the whining," Steinhoff concluded, before pointing out that you should toss out all levels with a FUUU Factor greater than 10.

Lucky me, lucky you

Another key point Steinhoff addressed was the role of luck in games.

Luck allows players to blame a game for a loss, and increases the chances that they'll continue plugging away at a difficult level. Conversely, players will like the dopamine rush of "feeling lucky" when they clear a tough level.

But designers should love luck, too, since it can simultaneously speed up poor players - allowing them to clear levels well beyond their skill level - and slow down power players by forcing undesirable boards on them.

Overall, Steinhoff notes that "luck broadens the user funnel and keeps more players in your game,"

But the catch with luck in puzzle games is that players want to believe it's their skill, and not luck, that helped them clear a challenge.

As such, they're prepared to a game that's "about 50 percent luck" - but Steinhoff noted that you, as a developer, want a game with "about 70 percent luck" for the balancing of exceptionally adept or struggling players.

The key to reconciling this 20 percentage point gap lies in "deceit skill" - moments where players feel they have more skill in a game than they ultimately do.

The final recommendation Steinhoff gave in the process of crafting a frustration-driven puzzle game is to sprinkle in "Fuck Yeah moments" - or, F* Yeah moments

These moments of pure, unadulterated bliss happen when everything falls in a player's favour and they skate through a challenging level when all looks lost.

Using an extreme example in Bejeweled where a concatenation of combos lead to a victory in a lost cause level, Steinhoff said the feeling a player walks away with at the end can only be described with the following meme.

Make it difficult, keep it casual, and use more luck

Steinhoff noted that these F* Yeah moments provide a ray of hope for players in difficult times, and hope is an extremely powerful motivator for player engagement and retention - perhaps equal to frustration.

In order to make sure players respond properly to F* Yeah moments, however, Steinhoff recommended tossing them at the player early.

This allows them to become aware of the existence of F* Yeah moments as they're getting invested in a game and thus creates a hope for their reappearance in later, more frustrating levels.

As an added bonus, Steinhoff pointed out that these F* Yeah moments are eminently sharable - players will want to tell others about their amazing ccomplishments, which aides in game discovery.

While forging a game with frustration as the main motivator is a tricky prospect, the end results are inarguable if it's implemented properly.

In order to make sure a game's injected with the proper levels of frustration, Steinhoff recommended that developers follow three simple rules to help players hate - and thus love - a game.

"Make it difficult, keep it casual, and use more luck".