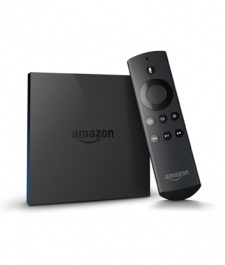 Called Fire TV, the $99 device is now available in the US, and comes with a free 30-day trial of Netflix and Amazon Prime.

It comes with a remote control, that can be used for games, although there's also a dedicated Bluetooth Fire controller.

Priced at $39.99, it's required for some games including Amazon's internally-developed Halo clone Sev Zero. This is bundled with each controller purchase, and you'll also get 1,000 of Amazon's virtual coins (value $10).

Talking to the box

"Voice search that actually works means no more typing on an alphabet grid. Our exclusive new ASAP feature predicts the shows you'll want to watch and gets them ready to stream instantly.

"And our open approach gives you not just Amazon Instant Video and Prime Instant Video, but also Netflix, Hulu Plus, and more. On Fire TV you can watch Alpha House and House of Cards."

Gaming isn't a core function for Fire TV, however.

In the launch press release, the category was listed last under the sub-heading "BonusGreat Games at Low Prices".

Publishers such as EA, Disney, Gameloft, Ubisoft, Telltale, Mojang, 2K, and Sega will support the device, with launch titles including Minecraft, The Walking Dead, NBA2K14, Asphalt 8, Riptide GP2 and Despicable Me: Minion Rush.

As well as the remote control and game controller options, you'll also be able to download the Fire TV app, which will enable you to control games using your phone or tablet.