Run away from arctic demon monkeys 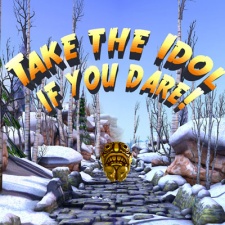 Following the news that Samsung is getting into VR technology, we're starting to get news of support from game developers.

The first game to be announced - by Samsung - is DeNA's previously unannounced Protocol Zero.

Quick on its heels, however, is the news from Imangi that it's bringing Temple Run  to the Gear VR.

Called Temple Run VR,  this is a brand new experience, which will have you escaping from arctic demon monkeys in a first person perspective, and dodging patches of snow and ice, dealing with frosty footbridges, and jumping between alpine cliffs.

"We are incredibly excited to be a part of this revolution in gaming, and we jumped at the opportunity to work with Samsung and Oculus to make Temple Run VR," said Imangi co-founder Keith Shepherd.

"Virtual reality opens up a whole new world of possibilities for us to create amazing experiences. We've truly been able to transport players to another world and let them viscerally feel the thrill of the chase."