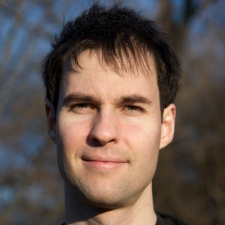 You know virtual reality gaming is becoming increasingly viable for developers when the big hitters start experimenting with it.

Imangi Studios joined the growing ranks of mobile success stories testing the VR waters, when it launched an immersive version of its massively popular Temple Run franchise for the Samsung Gear VR platform.

This got us thinking about whether or not smartphone games were a natural fit for VR adaptations, or if studios need to be careful not to shoehorn ill-fitting content into an HMD simply to get in on the virtual ground floor.

So we decide to have chat with Imangi co-founder Keith Shepherd to find out how he's approaching this new gaming realm.

“Virtual reality wasn’t something we originally considered when we created Temple Run back in 2008,” Shepherd begins, “mostly because the technology simply wasn’t there at the time.

"We thought it would be a cool idea, of course, but it wasn’t something that we could tangibly aim for.”

But a few short years later, virtual reality systems were springing out of the ground, and the face-mounted platform had suddenly become a tempting and viable prospect.

“Temple Run had become a globally recognised game, and once we saw VR was finally a real possibility, we decided to seize the opportunity and develop for it," Shepherd says.

“We decided to make Temple Run VR so we could learn more about VR technology and to take Temple Run to a whole new level we couldn’t have done before.

We went back to the drawing board to create a full new experience instead of doing an adaptation of Temple Run 2 for VR.

"It’s been an amazing learning experience, and it’s very possible that VR development could happen with our future projects.”

One question to be covered is whether it's possible to port a game from a flat display to a 3D, user-controlled camera.

Was there anything that could be salvaged from the original code that cut down on VR development time?

“We were able to get the game running pretty quickly in VR because we started off with the Temple Run 2 code base,” Shepherd explains.

“That was a fun start and proved to us that the game would work well in VR, but it also made us realise that a simple adaptation wasn’t going to be enough.

"To really make the game work well in VR we needed to change a lot. So we went back to the drawing board and decided to create a full new experience instead of just doing an adaptation of Temple Run 2 for VR.”

It’s an interesting tactic, creating a quick and ready version using a game’s original code, purely as a proof of concept. Then, if a game looks like it’s compatible with VR, work can begin in earnest by going right back to the beginning; rebuilding for this very different system.

In terms of other challenges, a surprising one was the importance of the perception of depth, especially with respect to creating art assets.

“Tricks often used on mobile like using a bumpy-looking texture on a flat surface isn’t going to work correctly [in VR]. You have to create those bumps by using geometry. Otherwise it’s going to look and feel flat, and that takes away from the overall player experience," Shepherd explains.

"It is a bit of a different pipeline than we’re used to, and took us some time to figure out the right balance of geometry detail versus performance.”

Another way in which VR forces developers to think in a different way is framerate.

Performance is important on all gaming platforms, of course, but if a smartphone game lags a little in places, or struggles occasionally when the screen fills with action, it's not a deal breaker.

I'm really happy with the final results we achieved for both the environments and characters in Temple Run VR.

In virtual reality it's much harder to forgive those kinds of sins.

"We aim to have all of our games run at 60 frames per second so we approached Temple Run VR in the same way," Shepherd says.

"The biggest challenge with hitting that FPS target in VR is that you essentially need to render the entire scene twice, once for each eye. We simply had to keep that in mind as we developed the content and art.

"It took a lot of playing around with, but I'm really happy with the final results we achieved for both the environments and characters in Temple Run VR."

Another potential gotcha is camera movement.

"Generally speaking, anytime you cause camera movement that's not initiated by the player, you have to be very careful, and avoid in-game actions that could cause motion sickness," he warns.

Currently the Samsung Gear VR operates from a free app store, and the Oculus Share platform is slowly building its way toward monetisation options. That's the reason most games on there are currently just demos.

However, Temple Run found its success as F2P game, so what's Shepherd's view about making money from the experiement?

“It may sound surprising, but we planned to make Temple Run VR free from the get go,” he says.

“We’re excited about the technology and its potential, so we were more interested in getting as many people as possible to experience what we created than we were to monetise the game.”

Even in the longterm, he's not sure how the business model will develop.

“As much progress as VR technology has had in the past few years alone, it’s still very early on in the consumer stage. It’ll be interesting to see long term what business models emerge for VR apps. I don’t really see any reason why in-app advertising or IAPs couldn’t work here too, but as always picking the right business model will depend on the game," Shepherd muses.

"I think initially, since the install base of VR games is much smaller than mobile, we’ll probably see a lot more premium-priced VR games.”

In this respect, IAPs and in-app ads have worked very well for the Temple Run franchise, but they hinge on sheer volume of downloads. With VR still in its fledgling state, it remains to be seen how long it’ll take for these free-to-play options to become workable.

“There’s a bit of a chicken-and-egg situation right now with making VR a successful medium,” Shepherd believes, explaining his thoughts on where VR is, and where it needs to be before it becomes a feasible outlet.

Consider what sorts of experiences VR can offer that more traditional technology can’t.

“There needs to be more devices in consumers’ hands to create the audience, but there also needs to be more great content on the platforms to get consumers to buy the devices. For now it’s an exciting new medium with a lot of potential for games, but there are still so few people with the hardware.

So, to conclude, what guidance would Shepherd offer to other developers who are tempted to go virtual?

“My best advice is to consider what sorts of experiences VR can offer that more traditional technology can’t, and to focus your development around that," he comments.

"This is a new medium with new challenges and potential, and it’s wiser to embrace that instead of trying to force old paradigms. That being said, I think it’s still very early on and the consumer market isn’t very mature. There aren’t many options to monetise VR games, which makes it quite hard to recoup any investments in content.”

Be ambitious, yet cautious, just as Imangi has always been. Good advice.