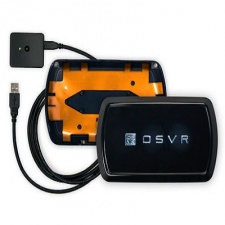 Addressing some areas in which its Open Source VR kit had been lacking at launch, Razer's latest iteration will add Android support and Infrared positional tracking hardware to the fledgeling VR system.

The OSVR Hacker Dev Kit 1.2 will now allow Android developers to dabble with VR in the same way as those favouring Windows or Linux.

Furthermore, Razer has promised to include a mobile faceplate in later versions of the kit, working hand-in-hand with the Android SDK in order to "let developers test their OSVR hardware on Android devices."

1.2 will also be the first OSVR kit to come with an IR system, comprising an 100MHz IR LED system and a camera that tracks the player's position over 360 degrees.

The OSVR Hacker Dev Kit 1.2, complete with IR system, is available for $299 - but be warned, it's not shipping until July.

For those who own the previous version and just want the IR upgrade, the price will be $130.

Razer reportedly raises up to $100 million in investment, signs new branding and data deal with Three