The bar's set too high, but we're to blame for setting it 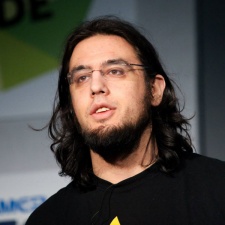 After all, Ismail is extremely well-liked among both industry peers and - for the most part - gamers themselves.

However, his talk suggested a need for the developer-gamer relationship to be reconsidered.

He argued that video game consumers are defensive about their hobby in a way experienced in almost no other medium, blurring the lines between creator and consumer by demanding absolute enthusiasm and positivity from developers.

“I can't play games properly anymore,” Ismail said, explaining that some games lose their lustre when viewed through the matrix of technology and design.

“Why can't I say that without a storm of critique?”

“We are developers, not gamers,” he went on.

“We gave up 'gamer' when we became creators - and we can be proud of that. It doesn't mean we hate games.”

We gave up 'gamer' when we became creators.

“[And] if you're a developer and you hate video games, that's fine. [The now-defunct studio] Tale of Tales hated games, and they made some of the most inspiring games I ever played.”

Ismail was also keen to highlight the difference between consumers and customers, the definitions of which are especially blurry in the F2P-dominated mobile space.

“Customers and consumers are not the same things,” he says.

The criticisms of paying customers, then, are obviously more important: “You don't have to accept something from a consumer just because they might give you money,” says Ismail.

However, by the same token, having paid doesn't give a customer free licence to have their complaints acknowledged.

We trained people to have unreasonable expectations.

“The contract between the customer and the developer is very simple: they give you X amount of money and we give them the game... don't be a slave to them.”

A lot of negative feedback and player pressure stems from a major misunderstanding about the complexity of game development, and Ismail reckons it's the industry's own fault.

“The reason we feel at odds is that we fucked up - we fucked up really bad.... we trained people to have unreasonable expectations.”

He pointed in particular to promotional materials that gloss over the complex reality in favour of a showy tech display.

“We told people that putting a PC game on console [with Unity] was the press of a button,” he stated.

“We told people that if you want to motion-capture you just put a suit on a guy like that and ta-da! […] The industry wants to be perfect.”

Ismail's takeaway was that developers don't need to go on like that.

There's an honesty in imperfection that people appreciate, and therefore it shouldn't be discounted - especially in the indie space.

“Our job is to not know, then figure out stuff, and then - eventually - we do know.”