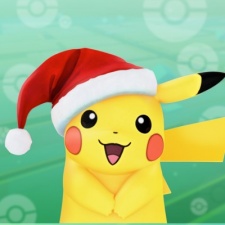 Niantic Labs is continuing on with plans to boost retention in Pokemon GO by adding in new Pokemon.

Togepi and Pichu, both first seen in Pokemon Gold and Silver, are available to be hatched from Eggs. More Pokemon have been added, but Niantic has left these unnamed for players to find on their own.

Seasonal content has also been added in the form of Santa hat-wearing Pikachu. These limited edition Pikachu will be available until December 29th, and Niantic is encouraging users to share their encounters with the Pokemon on Twitter.

Late to the game

The update comes just days after Niantic partnered with coffee chain Starbucks to turn 7,800 of its stores into PokeStops to encourage players to visit stores.

Pokemon GO has been quite slow in adding retention-boosting features. It held its first live event for Halloween, and only added Daily Bonuses four months after it first launched.

The update seems to have worked, however. The game has jumped from 8th to 2nd on the App Store top grossing charts in the US, and is back on top in the UK.

One year on: How Pokemon GO has proved it’s more than just a fad

Pokemon GO may be losing millions of users, but its retention rate is on par with Clash of Clans