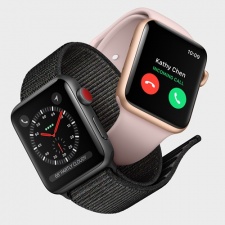 The newly unveiled Apple Watch Series 3 is taking the smartwatch range independent from the iPhone for the first time.

With the addition of cellular, users can now make calls, receive texts and more without having their iPhone nearby.

In an on-stage demo during Apple’s special event keynote, it was shown that the Series 3 can also effectively pick up the voice of a user even if the watch is by their side.

The new Apple Watch is said to include a 70% faster dual-core processor and new wireless chip.

The device will also feature watchOS 4, which combined will allow users to stream any of the 40 million songs on Apple Music. The watch can also be used with the company’s wireless headphones, AirPods.

The Apple Watch Series 3 will be available for pre-order from September 15th and will officially launch on September 22nd.

Where are the games?

There was no mention of games during the reveal of the latest Apple Watch. This time last year, Apple had announced the smartwatch would be compatible with Pokemon GO, but no such similar announcements were made during this year’s presentation.

In terms of games, our very own Ric Cowley previously suggested that if Pokemon GO can’t save the Apple Watch, nothing will. And it appears the device is now having far more success in the realm of fitness and health than in the games space.

According to Apple CEO Tim Cook, the userbase continues to grow for Apple Watch devices, with sales said to be up 50% year-on-year.

Cook also claimed it was now the number one watch in the world, usurping Rolex to the top spot. It’s not clear exactly what the criteria is for Apple’s claims, however.