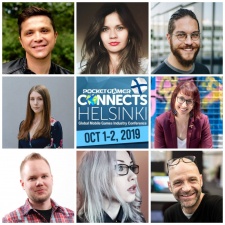 It’s just under two months from now until the sixth edition of Pocket Gamer Connects Helsinki, but the speaker lineup continues to grow in the lead up to the event - much like the event itself has grown over the years!

These new faces join an already amazing list of the world’s leading authorities from the games industry for our return to the mobile gaming motherland, held at The Cable Factory on October 1st and 2nd.

Following the likes of Square Enix Montreal, Riot Games, Lockwood Publishing, Jam City and more - which you can find out more about here and here - these speakers will share their key industry insights, experiences, analysis and advice to 1,500 games industry professionals.

You could save up to $350 on the price of tickets and see these incredible speakers with our Early Bird prices! However, these discounts end midnight TONIGHT. Don’t delay book now!

And now to introduce our latest speakers...

After a great event with Pocket Gamer Connects Hong Kong, Animoca Brands are back with CEO Robby Yung. He was previously the co-founder of many different companies and held senior positions, such as CFO of Redgate Media, CSO of One Media Group and CEO of One Studio. He brings a wealth of knowledge to Connects Helsinki and will be discussing choosing winners and revealing his strategy to acquire companies.

Andreea Chifu certainly knows the games industry from the inside out, and presents a session for Raw Fury Games on cross platform publishing. She’s worked in the industry for 10 years, helping companies like AMA, Paradox Interactive and Raw Fury on the business side. She’s also been acting as an advisor for indie studios and is a believer in transparency, responsibility and love.

Vastly experienced Jeff Tremblay of Nutaku, shares his expert analysis which spans the last 20 years of being involved in business development within the games industry. He will discuss the benefits of using existing IPs vs creating new ones on a panel filled with other star speakers. Whereas Jari Pauna of Motorious will discuss using IP in mobile games, how to make money - and how not to lose it.

Blackthorn Visions’ Ida-Emilia Kaukonen gives her analysis on the psychology and neurobiology behind social media and/or community management. She has worked for years on games and communities, participating in the launches and production of titles such as Heroes of Warland, Medals of War, and Raids of Glory.

To mobile and beyond

Peakpoint Consulting’s Daniel Persson shares his advice on empowered teams, key people and how to guide them to success; the three pillars of a successful mobile games studio. A must-see talk for any mobile game developers starting their own studio.

Playwin’s Garrett Weinzierl looks at the current state of blockchain, and which strategies will survive the next few years.

Flying Sheep Studio’s Casilda de Zulueta looks beyond mobile and into the future of HTML5 games. This talk will walk you through the studio’s project pipelines using open source and its proprietary software to give you a window into the development process. Bill Rehbock of castAR looks at next-gen consoles on our brand new track for Connects Helsinki 2019, Big Screen Gaming.

Independent game producer and designer Juan Gril gazes into gameplay depth in hypercasual games, arguing that the common belief of development is that you focus on more than a simple core game mechanic is antithetical to hypercasual game development. He will explain how to strategize creation of additional elements of gameplay effectively, in terms of impact and development time, while showing examples from successful hypercasual games.

From the bottom to the top!

Jussi Tähtinen of Nitro Games presents the challenges of managing living competitive games to the audience. Tähtinen is a gaming executive with a decade of experience in strategy games, and 20 years of experience in making games.

David Mohr of Gamevil shares their journey from humble beginnings to 1.2 million viewers at the last world-final tournament of Summoners War World Arena Championship, taking the series all over the world and building on its place in the esport industry. He will share what they’ve learned about each region they’ve been to in the past three years, as they lead up to the first ever world final to be held in Europe on October 26.

Remedy Entertainment is amongst the list of companies to join our speaker lineup, as Juha Vainio plans to share his experiences, insight and challenges in producing a AAA game, as well as some of the methods he used to overcome them, while their very own Brooke Maggs presents a session on storytelling as shapeshifting.

Since the launch of Kickstarter in 2019, more than 17 million people have backed a project on the platform, with $4.4 billion being pledged and 166,482 projects successfully funded. Now we look at the love story between Kickstarter and games, with Michael Liebe giving a presentation which features insight into the growth and evolution of the games category on Kickstarter, while offering tips and tricks for game developers.

Funday Factory’s Emil Kjaehr and UX is Fine!’s Jason Schklar share their views and tips on what developers need to know in each stage of development.

Housemarque’s Harry Krueger reflects on the unique development of Nex Machina two years after it’s release, and the challenges and lessons the team faced as they set out to create a modern arcade classic. He will also explore the creative philosophy behind Housemarque’s unique brand of arcade-inspired games, the key design decisions that made Nex Machina its most critically acclaimed title to date, and how the game marked the bittersweet end of an era for Housemarque.

Lead game designer Ján Litecký-Šveda of Pixel Federation gives a session on designing for live ops. He comes from a rich background in pen-and-paper RPGs and LARP, from which he crossed over into the video game world. As fond of creating game mechanics as he is of creating and telling stories, he plays to these strengths every day as he fuses these core aspects to set the tone and vision of the Pixel Federation gaming IPs.

The fun never stops at Pocket Gamer Connects! We also have senior representatives from the biggest brands and exciting innovators in the games industry such as Tenjin, Unity, Huawei, JoyPac and more, including:

Stay tuned as we will reveal more names soon!

We also run a whole host of fringe events and networking opportunities alongside the conference talks and sessions. Who knows, you could meet one of these amazing speakers at these events?

Save up to $350 off the price of tickets with our Early Bird discount. However time is running out as these discounts end midnight TONIGHT. What are you waiting for? Book now!

We’re still adding to the schedule and if you’d like to speak to our audience, we'd love to hear from you! Not only are we actively seeking expert speakers for Helsinki right now, but submissions are already open for future Connects events in MENA this November - and even London in January 2020.
If you’d like to speak at any of our international events, get in touch using this form or email patty.toledo@steelmedianetwork.com.