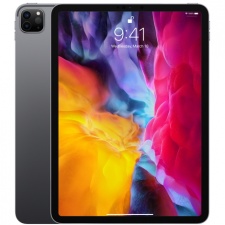 A new iPad Pro model will be launched by the end of March.

The new product features liquid retina display. A new 10mp ultra wide camera has been added on top of the 12mp wide camera – a LiDAR scanner has also been utilised, which makes the new model more advanced in Augmented Reality.

"The custom-designed LiDAR scanner uses direct time of flight to measure reflected light from up to five metres away, both indoors and out," reads the product description.

"It works at the photon level, operates at nanosecond speeds, and opens up tremendous possibilities for augmented reality and beyond."

Faster than a PC

Due to its A12Z Bionic chip, the latest iPad Pro can rival many PC's and laptops in terms of speed. It also features an 8-core graphics processor.

"A12Z Bionic is designed to be put to work, especially with pro apps," reads the product description.

Earlier this month, Apple closed all of its retail stores outside of China due to the coronavirus outbreak. Furthermore, its annual Worldwide Developers Conference has adopted an online format this year to prevent further Covid-19 contractions.