The acquisition comes in at approximately $142 million 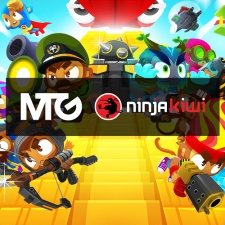 Ninja Kiwi is best known as the creator of Bloons Tower Defense, a series of strategy titles. The acquisition comes in at approximately $142m, with a potential $47m in further aggregate.

”The strong organic traffic to Ninja Kiwi’s portfolio of games is hugely impressive, as is the company’s successful combination of paid and in-app purchase models in its pricing structure - both are testament to the quality of the titles that Ninja Kiwi has created,"  MTG group president and CEO Maria Redin said.

"We’re very pleased that Ninja Kiwi is joining MTG and our growing gaming vertical, further broadening our offering through the introduction of a new genre.”

Ninja Kiwi was founded in 2006 by Chris and Stephen Harris. The first Bloons title released the following year as a flash game, before making its way onto mobile and consoles.

The company's co-founders, chief executive officer Chris Harris and chief creative officer Stephen Harris, also commented: "We are genuinely excited to join MTG. We have developed our relationship over a number of years and have often discussed the opportunities of working together.”

Strategy titles have been a significant revenue driver in the last year, with tower defense titles leading the charge as the fast-growing subgenre. It grew 131 per cent year-over-year to $63.7 million. Player spending on strategy games in the US alone crossed $2.8 billion in 2020.