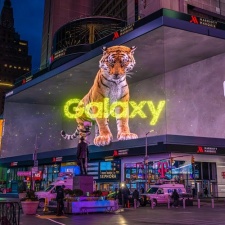 Korean tech firm Samsung will hold today's hardware launch event, Samsung Unpacked, in the Decentraland metaverse, wherein the global reveal of the forthcoming Galaxy S22 mobile phone and Tab S8 will be made.

In the lead-up to the event, Samsung’s Tiger in the City campaign features giant tigers on digital 3D displays in New York, London, Dubai, Kuala Lumpur, and Seoul to showcase new advancements in its low-light smartphone photography technology.

Samsung Unpacked 2022 starts from 10:00 ET/15:00 GMT today (February 9). The launch will also be live streamed as a conventional video on the Samsung webite, as well as Twitch.

While not a name synonymous with gaming, Samsung was among numerous entitites which invested around $50 million in blockchain gaming outfit Animoca Brands in July 2021.