Unveiled in the metaverse 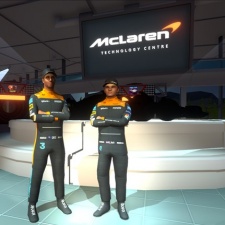 Roblox has released the newly revealed McLaren MCL36 as a virtual car in its McLaren F1 racing experience.

The virtual Roblox reveal was coordinated with the real-world reveal, making this the first instance where a Formula 1 brand has unveiled a race car via the metaverse.

McLaren F1 drivers Lando Norris and Daniel Ricciardo will be using the real-world version of this car to compete in the 2022 FIA Formula One World Championship, meanwhile Roblox players will race the car in McLaren gear across virtual worlds.

"Our car launch is one of the most exciting events of the year and this time our fans will have the chance to sit in it before me and Daniel have even driven it, which is pretty cool," said Norris.

Roblox community developers from The Gang recreated the race car’s design for the metaverse and, in addition to the car, a virtual equivalent of the McLaren Technology Centre has been created with Norris and Ricciardo avatar bundles, digital items, and an opportunity for selfies.

"Roblox’s technology has enabled an inclusive, immersive experience which complements our physical launch event, giving people a unique and incredible moment to drive the MCL36 before even our drivers," said Lindsey Eckhouse, McLaren Racing director of licensing, e-commerce, and esports.

The Gang CEO and co-founder Marcus Holmström also commented: "The Gang used the new Roblox 'Future is Bright' lighting technology to create highly realistic and dramatic lighting in the virtual McLaren Technology Centre. We built a precise 3D model representation of the car and applied physically-based rendering technology to it."

"We’re really proud of the creative ways brands are authentically coming onto the platform and connecting with our community," Roblox VP of global brand partnerships Christina Wootton said.

"McLaren is a shining example of how brands can push the boundaries and unveil their products to a global audience."

Last week, Roblox partnered with the Brit Awards to launch the first virtual VIP party for an awards show on the platform.