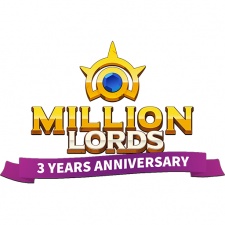 Million Lords, the first game released by studio Million Victories, is celebrating three years of successful growth. As a result, they plan to celebrate with their biggest to-date in-game event, a series of giveaways, and some exclusive, limited-time content for their multiplayer community.

The company, which was founded back in 2017, has seen the successful growth of Million Lords, which launched in 2019, as a real-time online multiplayer title. The game now stands as one of the top French-made mobile games and holds a steady position in the highest grossing charts for both Google Play and the App Store, despite aggressive competition in one of the most lucrative and heavily-advertised genres of mobile gaming.

Million Lords can also celebrate the 'million' part of their name as the game now has more than a million downloads across both storefronts and, among those, over 150000 active players each month, with an average daily game time of 1.6 hours; that's 240000 hours, or 27.4 years of gameplay within a month.

Marketing director at Million Victories, Arnaud Dreistadt commented on the milestone saying “We are very happy and proud to celebrate Million Lords' third anniversary. We started this incredible project with the original idea to develop a game that was never seen before, respectful to the players and fun to play. And today we are incredibly proud to see that we are growing so fast and make so many players passionate.”

Million Victories secured a series A funding round last year which they have put to good use in helping them establish their brand and go on to achieve these milestones, the MMO title is set to continue reaching new heights whilst Million Victories are looking to expand in the future. They raised $1.4m back in 2019 as part of their campaign to bring Million Lords to a wider audience.