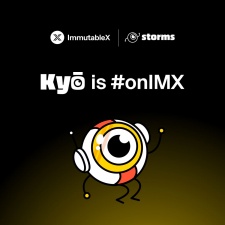 Earlier today, the Singaporean mobile game company Storms has announced their new blockchain-integrated hyper-casual mobile gaming platform. Called “Kyō” after the Japanese word for “joy, fun or entertainment”, the platform has ambitious goals going into the future and has already collected licences for major franchises to appear on their platform. Storms are ambitious about the potential of the mobile game market, noting, “Last year, the sector was worth $131 billion and is projected to reach $173 billion.”

A major part of Kyō will be blockchain and NFT compatibility. Storms will be partnering with blockchain company ImmutableX who will be providing infrastructure support for this integration. In a statement, CEO of Storms David Yin said, “From traditional gaming to Web3 gaming, Storms remains committed to delivering quality and frictionless gaming experience for billions of players, and I am happy that ImmutableX shares the same vision. Thanks to ImmutableX’s unparalleled scalability, zero gas fees and easy-to-use APIs, Kyō gaming platform is now one step closer towards empowering gamers with total control over their in-game assets.”

Storms have also secured other major stakeholders in the new platform. With, “iCandy, the largest independent game developer in Southeast Asia backed by Web3 gaming company Animoca Brands, and other notable shareholders including Singtel, AIS and SK Telecom Group.” Their goals extend to an extremely ambitious aim to, “-provide frictionless Web3 access to the 7 billion mobile users worldwide.”

Even so, aiming for the very top with Kyō towards 7 billion users is an ambitious one. But with significant backing already, Storms may just have the resources on hand to achieve this, or at least make a massive splash when Kyō releases in early 2023.

How Hut 8 is powering the blockchain gaming revolution