Stateside: Don't try and fight your pirates  make the most of them

July 23rd, 2013 - 05:40pm
By Carter Dotson, Stateside columnist
Chicago-based Carter Dotson is a senior writer at 148Apps.com, which was acquired by PocketGamer.biz publisher Steel Media in 2012.

Stop the press. Piracy is still a problem on mobile.

It's an issue that's been reignited following an admission by Lucky Frame, which revealed that, a couple of days after the launch of Gentlemen on Android, the game had sold 8 copies on Google Play.

However, in reality there were far more than those 8 taking on the title on their Android devices. According to the studio, the game had been pirated on Google's OS a whopping 2,462 times.

For those of you without a calculator to hand, that's a piracy rate of 99.68 percent. Ouch.

Here's the thing, though: piracy is a problem that can be solved in one of two ways.

Neither actually solves the root cause of the problem  one which, if history teaches us anything, will probably never fully go away. People have been pirating software since the days of Don't Copy That Floppy, after all, but there's every chance that taking certain steps can help.

The first solution? Make piracy a non-factor by going free. It's the model the majority of industry is shifting to anyway and, if one developer is to be believed, can make a big difference.

As of May, St. Louis-based studio Butterscotch Shenanigans had sold 1,538 copies of its game Towelfight 2 on Android. In comparison, there were also 34,091 pirated copies out there.

That's a piracy ratio of around 22:1. Compare that to the more tolerable 1:1 ratio the game enjoyed on iOS. 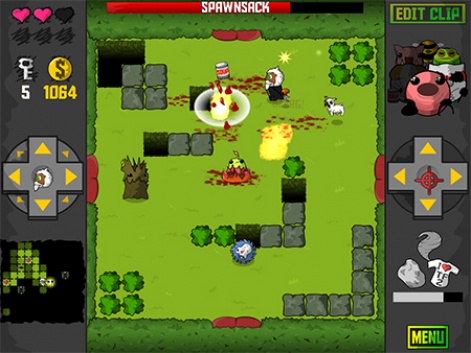 Towelfight 2: The Monocle of Destiny

Nevertheless, what did the studio do for its next game, Quadropus Rampage? Make pirates a non-factor by going free-to-play.

And, so far, its worked for the studio. "[Quadropus Rampage is] bringing in way more revenue and way more players with whom we are able to forge connections," detailed co-founder Sam Coster

"Our Twitter following has multiplied seven times since launch, our Facebook group thirty times, and our newsletter eight times."

Did the Towelfight 2 pirates help Quadropus Rampage? Coster has his doubts.

"On Android, we can see from our analytics that the cross-over between Quadropus Rampage and Towelfight 2 players is about 5 percent when you include the pirates. However, only 6 percent of Towelfight 2 users actually paid to play it. Our guess is that those who paid are more likely to make up the bulk of that cross-over group."

By adapting to the market instead of swimming against the current, his studio is finding a way to survive. Free-to-play is always a risk, but for those tired of people not paying to play their game, why not make it a non-factor?

But then again, why not just go with the current? Piracy is an inevitability for premium apps. It's been a problem since both the App Store and Android Market launched and it's clearly not going away.

Indeed, it may be the case that many pirates are simply out of reach of the law, even if the forces existed to take them down.

Josh Presseisen of Crescent Moon Games believes that, based on his own experience, gamers in China and Russia "account for 90 percent of all [pirated] downloads."

There's basis to this. China and Russia both have deep-seated piracy problems, and both are long-standing members of the Office of the United States Trade Representative's list of countries that are havens for piracy.

According to Reuters, Russia's been mentioned for 17 years straight, China for 9 years.

Why do these countries have such a piracy problem? Part of it is cultural. There are reports that Russia's piracy problems stretches right back to the 1990s and, even to this day, enforcement is on the rise in order to tackle the issue.

China, too, has a cultural piracy problem, but also practical ones too. Google Play still doesn't support paid apps in China and Amazon only set up shop in May.

The piracy problem is so ridiculously deep that even Google Now points users towards sites pushing pirated copies of games on occasion. If Google can't clamp down on piracy on its own platform, why would individual developers be able to crack it?

Presseisen's advice? "Don't spend time thinking about pirates and pirating," he told us. "Anything you do is going to piss them off - like the recent firing locks that were put in Deus Ex for jailbroken phones."

It's true: anti-piracy methods such as that will just anger users, especially as they wind up harming legitimate users.

Even Butterscotch Shenanigans tried a light form of DRM, building in Google Play license checks on Towelfight 2  checks that impacted me personally when I tried to play the game on my Nexus 7 on an airplane without wifi.

Yet, the studio's own stats suggest such a measure had little impact on the pirates.

Instead of fighting the pirates, Presseisen advocates making lemonade out of stolen lemons.

"At least [pirates] are still good for one thing  testing," he concluded.

"You can still gather data to help improve the game, even in pirated copies. This goes for iOS and Android - focus on making on making the game that you want to make. Until there is more of an official crackdown by Apple and Google, things are unlikely to change."

Coster agrees that a deep cultural change needs to happen: "It is a fact of life in our market. Until there's a larger cultural push by players and reviewers alike to make it more taboo it will persist.

"On that note, reviewers need to seriously consider the printing of lines that suggest that $3 is 'pricey' for a quality game that delivers hours of entertainment.

"As a developer, the only thing you can really do to safeguard against it is to connect with your players as humanly as possible.

"It's our belief that the more connected we are to our fanbase, the more likely they are to see that we are dependent on them for our livelihood and to respond in kind.

"Don't let the pirates disconnect you from your fans by kindling in you a deep resentment toward anyone who plays your games."

Reply
EthicalFan
Comparing BitTorrent to copying floppies is like comparing a butter knife to a fleet of bulldozers. Copyright is the creator's choice, not the filesharer or the ISP.
Posted 8 years, 9 months ago