The Charticle: Is the Star Wars licence a force to be reckoned with? 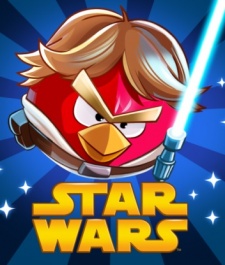 November 12th, 2012 - 05:29pm
By James Nouch, Staff Writer
It's no exaggeration to say that, since launching on 8 November, Angry Birds Star Wars has been really quite successful.

More impressively, the duo also topped the App Store's grossing charts too, and since launch, neither the iPhone nor iPad version of Angry Birds Star Wars has left the #1 spot in either chart.

Indeed, the iPhone version of Angry Birds Star Wars has conquered the top grossing app charts in a total of 42 countries, including the US, UK, Canada and Germany. The iPad version has performed the same feat in 64 countries worldwide.

The force is strong with this one

As ever, it's a more complicated picture on Android, but Angry Birds Star Wars (which is available for free from Google Play) is currently #1 in Android's free app charts.

The $2.99 Android version of Angry Birds Star Wars HD is currently at #3 in the platform's paid app charts.

On Windows Phone 8, the game - which retails for 79p in Britain - is currently sat in 13th spot in the UK's top paid chart, while in the US the 99c release is in 10th position.
Angry Birds Star Wars also launched on Windows 8, though charts are currently unavailable.

Regardless, it seems safe to say that Rovio's latest is more than holding its own - though that's unlikely to surprise.
Angry Birds is a proven star performer. The real question, however, is how its performance compares to other releases in the Star Wars series.

The suggestion is, previous efforts to utilise LucasArts' brand on mobile haven't achieved anything like the level of success Rovio's currently enjoying.

THQ's novel augmented reality game Star Wars Arcade: Falcon Gunner launched in November 2010. Upon release, the $4.99 iOS title entered the paid games chart at #24, peaked at #11 a day later, and then began a slow slide out of the charts.

It's a similar story in the grossing games chart. Falcon Gunner peaked at a very respectable #3, but this success didn't last.

2010 was a long time ago, though, and two years feels far far away. More recently, LucasArts itself published a take on the brand in the form of Star Wars Pit Droids  a puzzler based around the robotic characters featured in Star Wars: The Phantom Menace.

In the days following its release, the $1.99 game climbed to #69 in the top paid games chart. Then, it fell through the rankings faster than a pod racer piloted by a prepubescent Jedi.

Within six weeks of release, the game was no longer listed in the top 1000 paid games chart.

You're my only hope

That's the franchise's mobile gaming past dealt with, but what of its future? Well, first of all, it's worth noting that the Star Wars franchise has a new custodian.

Disney acquired Lucasfilm and its properties for $4.05 billion in October 2012, and generated headline news worldwide with the announcement that a new instalment in the Star Wars series would hit cinema screens in 2015.

But how will this acquisition affect Star Wars' gaming exploits? During an investor call, Disney CEO Bob Iger explained that the company is "likely to focus more on social and mobile than we are on console."

Iger mentioned that Disney would "opportunistically" make use of licensing deals to allow other companies to create Star Wars games for consoles, but clearly he sees mobile as the natural home of in-house Star Wars games.

That makes perfect sense. After all, Disney's seen tremendous success in the mobile gaming space with titles such as Where's My Water.

But the 'House of Mouse' hasn't just built successful games  it's also proven adept at using tie-in mobile games to simultaneously earn money and promote its movie properties, as we examined in last week's Charticle.

And that's a skillset that's bound to come in handy once Disney brings its own version of Star Wars to cinema screens in a few years' time.