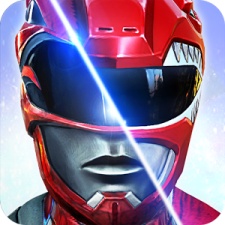 This time, we're taking a look at nWay's Power Rangers: Legacy Wars, a team battler based on the cult favourite IP.

With Marvel: Contest of Champions, and to a lesser extent Transformers: Forged to Fight, Kabam has proven that pairing iconic IP with vast character rosters and simple fighting mechanics can make for compelling mobile games.

And from the outset it appears that nWay has cribbed the same formula for Power Rangers: Legacy Wars, with the game built around creating a three-Ranger team and taking them into battle.

However, there are a few key differences here. First off, the actual combat feels slightly more deliberate thanks to the introduction of a Power meter and predetermined moves that each come with an attached Power cost.

When it comes to the metagame and monetisation design, Legacy Wars moves even further away from Kabam's scrappers.

This means that speedy reactions take a back seat, with the game favouring a more tactical approach to monitoring Power levels and deploying the right moves at the right time.

When it comes to the metagame and monetisation design, Power Rangers: Legacy Wars moves even further away from Kabam's hero-filled scrappers.

The first surprise is that the game doesn't build around a gacha system for recruiting new characters. Instead, it employs a system more familiar to players of Clash Royale.

A Morph Box - Legacy Wars' equivalent of Clash Royale's Chests - are awarded to the player for each win.

The contents of these Morph Boxes are soft currency Coins and character Shards. These Shards go towards unlocking and upgrading characters, and Coins are used to complete this process.

Shards are randomly distributed, but differ from a regular Gacha system in the fact that discovering a character is only the beginning.

It takes only a single Shard to discover a character, but 10 to actually recruit them to your squad, 20 to upgrade them to level two, and so on.

With the rarity of these Shards dependent on the character's class, the same essential principle as Gacha is in action.

Another significant point of inspiration from Clash Royale is that each of the Morph Boxes awarded for a win fills one of four slots, only unlocking one at a time over a period of hours.

This isn't the first game to take that now-famous timed reward mechanic from Clash Royale, and it won't be the last.

Hard currency Power Crystals can be used to unlock Morph Boxes straight away, the incentive being that if all four slots are filled, the player receives no rewards for their victories.

The core loop of Legacy Wars is relatively simple.

It's a softer version of the hard energy gate - a monetisation mechanic that appears now to be rarer than ever - and a solution that seems to work for both players and developers.

This actually makes the monetisation and core loop of Power Rangers: Legacy Wars far simpler than the likes of Transformers: Forged to Fight.

Power Crystals are available in bundles ranging from $0.99 for 80 to $99.99 for 14,000, but can also be earned through Morph Boxes and by completing Achievements.

But Coins also play a very important role, and are required every time you wish to unlock or upgrade a new character. They trickle in through Morph Boxes, but can also be exchanged for Power Crystals if in particularly low supply.

But everything feeds back into the core gameplay, which is pared back in its focus with only one mode. PvP fights earn Morph Boxes, Morph Boxes yield Shards and Coins, which in turn are used to unlock and upgrade new characters.

It's refreshingly simple, and even the fact that 50% of the main menu is given over to promoting a timed offer - for new players, the Green Ranger Ultimate Starter Pack, which features a new Ranger, a Super Morph Box and 1,200 Power Crystals for $9.99 - there's no undue pressure to spend.

A well-optimised F2P game doesn't have to feature a thousand different resources and interlocking mechanics.

In fact, this is actually less oppressive than the deal popping up intermittently, as it ensures that you're only confronted with the specifics of the deal if you actively tap on it.

There's no semblance of in-game advertising here either, although interestingly, one of the backdrops features Krispy Kreme branding, referencing a scene from the latest film. It's an unobtrusive approach to brand integration that's unlikely to concern players.

Power Rangers: Legacy Wars shows that a successful and well-optimised free-to-play game doesn't have to feature a thousand different resources and interlocking mechanics.

That's not to say it's dumbed down, but it certainly stands out as a game with a tight focus that it executes strongly.

Most would assume that its genre is not the most natural fit with the monetisation design pioneered by Supercell in Clash Royale, but Power Rangers: Legacy Wars shows the versatility of those mechanics admirably.