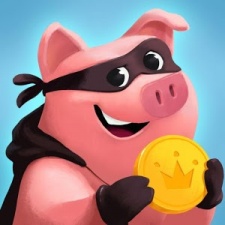 This time we're taking a look at Coin Master, the slots-based build and battler from Tel Aviv studio Moon Active.

Spin when you're winning

With our previous entry examining the Blackjack-based RPG Battlejack, and now this on the heavily casino-inspired Coin Master, it could be suggested that mobile game developers are increasingly eyeing the work of social casino firms.

And if this is indeed the case, it's easy to see why: social casino titles are some of the highest grossing apps out there.

But while Battlejack merely used the mechanics of Blackjack for its combat, Coin Master builds everything – including its monetisation – around a slot machine.

Coin Master is a build and battler that allows all the actions associated with that genre – constructing and upgrading buildings, attacking other players' bases, defending against incoming attacks and earning currency – but only on the whim of the slots.

Three hammers allow you to attack the village of a random opponent. Three sacks of gold grant you a large haul of coins, the game's soft currency. Three shields allow you to automatically defend one attack, while three pigs give you the chance to raid the Coin Master – a player with a vast number of coins stored away.

Once you've burned through the free spins that you're given upon starting the game for the first time, the distribution slows to a crawl.

Five free spins are given every hour, which means that it can take several hours to generate enough coins to buy the next building for your village.

Random by its nature, the pace of progression is wildly variable.

Successfully raiding a player for several hundred thousand coins obviously accelerates the process, but a series of barren spins is just as likely.

Clearly, whether or not it's healthy or ethical for the mobile games industry to be borrowing from the world of gambling is debatable.

Coin Master never tries to obfuscate that this is a game of chance.

Indeed, spend money on some gems in Clash of Clans and you know precisely what you're getting and what you can spend it on. Spending money on 50 spins in Coin Master could yield an unprecedented fortune, or a bitter taste.

The luck of the draw

Though to be fair to Coin Master, it never tries to obfuscate that this is a game of chance.

The visual language of the one-armed bandit could hardly be clearer,and there's even a mechanic in which you can double down and 'bet' two spins to double the reward from a single spin.

It's even clearer when you spend money, too. Spins are available in bundles ranging from $1.99 for 20 to $99.99 for 1,350, and for most games, purchase of one of these bundles would be where the sales patter ends – at least for a while.

But in Coin Master, it's merely a chance to persuade the player to up their stake. By doubling their initial spend, the player is given the chance to at least double their reward – but potentially winning 10 times the amount – by taking a chance on a spinner.

In reality, though, Coin Master's biggest problem is not that it uses the language and patterns of gambling. It's that it uses them to excuse the fact that its main – arguably its only – mechanic is barely accessible without spending money.

But there is slightly more to Coin Master than this.

Coin Master is a slot machine masquerading as a game.

Rewarded video ads allow the player to earn a single free spin, for instance. Watching an ad can also yield 15,000 coins, which can also be bought on their own for real money.

There are also cards to collect, which come in chests – ranging from two million to 12 million coins – but their function is primarily a social one whereby players can gift each other cards to complete one another's collections.

Players are then granted currency rewards for completing card sets.

But really, it all feels like layering to distract from the stark truth: that Coin Master is a slot machine masquerading as a game.

It's not a badly designed slot machine – it's extremely compelling, enjoyable even – but it's a slot machine nonetheless.

How does Final Fantasy XV: A New Empire monetise?