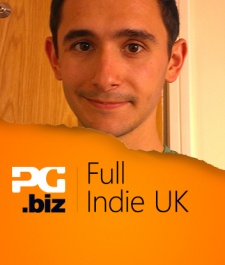 One-man indie game studio Twice Circled launched at the beginning of 2013 after Tim left his full-time job as a Mechanical Engineer to pursue a career in game design. His first commercial release was space RTS Ionage.

At the end of 2012 I quit my full-time job and started a company called Twice Circled. Since then, the company has had two revenue streams: freelancing and independent game development.

In May this year I started work on my next game, an as yet unannounced strategy title for PC. For the first time, I’m in a financial position where I’m able to work full-time on the independent game development side of my business.

This was a major goal and milestone for me professionally, and now in retrospect, I believe freelancing has played a large role, both directly and indirectly, in getting me to where I am today.

In this article, I look at some of the advantages of freelancing and how it can be a useful tool for transitioning between a full-time salaried job and a career as an independent developer.

First I want to clear up some terminology. This article specifically refers to freelancing as opposed to contracting; terms which are often used interchangeably.

While contracting involves much of the same legwork as freelancing - setting up a limited company, being responsible for finding your own work and working for multiple clients, sometimes at the same time - the way you carry out the work is quite different.

Contractors are paid directly for the hours they work, rather than for what they deliver. This leads to a number of constraints on the way the work is carried out. For example clients often want contractors to be embedded directly in their offices, working fixed hours and normally full-time.

Attending networking events can be tremendously valuable for an indie developer.

True freelancing often involves creating a product/feature/asset for a fixed price, with high levels of autonomy, normally with the option of working from home or your own office. Freelancers pick their own working schedules and this is the cornerstone of my argument for why freelancing can work so well in parallel with indie game development.

So if you are leaving your salaried job to follow your dream of becoming an indie developer, please be wary of the contracting route. It may seem like an easy, and often lucrative, option. But you will miss out on so many of the advantages that freelancing has to offer.

It should go without saying that attending networking events can be tremendously valuable for an indie developer. They offer great opportunities to learn from your peers as well as meet potential collaborators, journalists, publishers and even investors.

However, industry events almost invariably take place during the day on weekdays, making them very difficult to attend if you’re a contractor or permanent salaried employee.

As a freelancer, attending shouldn’t be a problem, as long as you plan ahead. Take account of days away from the office in your work schedules and manage your clients’ expectations accordingly.

The power of the virtuous circle

In my experience, the processes of freelancing and making my own games have fed into one another, creating a powerful virtuous circle.

For example, after releasing my first game, Ionage, in the summer of 2013, I attended a number of events, sharing my experiences and the lessons I’d learnt along the way. As a bi-product, I made a number of contacts that have led to freelance opportunities since then.

Freelancing can help your independent development too. I’ve met a number of artists and other potential collaborators through freelance work for local studios, some of whom I’ve gone on to employ in my own projects.

Last autumn, a successful indie developer asked me whether I was a “full-time indie”? I replied yes, to which my questioner responded “Not even I’m full-time!”.

Of course, what they wanted to know was whether I was working full-time on my games, to which the answer was no at the time, but I still considered myself a “full-time indie”.

For this reason I believe freelancing prepares you for many of the difficulties of being an independent developer. You get used to the day-to-day running of a business and importantly business development activities such as sales and promotion.

Learning to say “No”

Of course there are things you need to watch out for if you’re making the transition from contracting or a salaried job to freelancing.

The most common mistake I’ve made is taking on too much work.

The most common mistake I’ve made is taking on too much work. As the old adage goes: “it’s a wonderful problem to have” but if you ever let it affect the quality of your work, or worse, your personal life, then it’s a serious problem and you should take steps to correct it.

Always be honest with yourself (and your clients) about what you can handle and don’t be afraid of leaving yourself with some downtime if you can’t fit it all in. The advantage of being an indie developer in parallel is you can always fall back to your own projects during the down times.

Keeping out of the red

The other important one to watch out for is cash flow. Every time you schedule a bit of work (paid or otherwise) always do a basic extrapolation and make sure you won’t run out of money between the paid jobs. Be realistic about your outgoings and always give yourself a cash buffer in case of an emergency.

Freelancing is by no means for everyone. The business development activities in particular could be a real turn-off for someone who prefers to keep to their core competency. That being said, these are some of the most important skills to have as an indie developer too.

So if you’re thinking of giving this stressful, fun, often heartbreaking but always memorable career a go, consider using freelancing as both a practice run and a stepping stone to achieving your final goal.

Tim Wicksteed runs indie developer Twice Circled, creator of steampunk themed, space RTS Ionage which came to Android devices last year. His next game is an as yet unannounced strategy title for PC. Follow him on Twitter @twicecircled.