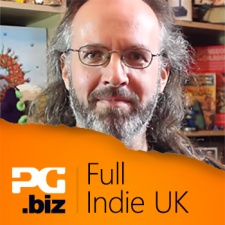 28 years. No age for an oak tree, a good age for a whiskey, a pivotal age for a person, but far too long to have waited to do the only thing I’ve wanted to do since I was 12 - make games.

Over the past 18 months I’ve exhibited at Rezzed, The Gadget Show Live, Radius and Games By The Sea. I’ve talked on stage at Rezzed, IGCCD and Radius. I’ve been interviewed by groups and individuals big and small.

I ran a successful Kickstarter and now develop in front of an audience instead of in seclusion. I’ve pitched at a Pocket Gamer Big Indie Pitch. I’ve integrated into local and remote game dev communities. I’ve started mentoring kids in how to program as part of Coder Dojo. I’ve even written an article for the first time.

And yet I did them, even so.

A couple of years ago I started to analytically peel away my fears. I learned to place trust in my ability to deal with situations as they arose instead of trying to predict and solve them in advance. I started to say an immediate ‘Yes’ to new things before the ‘No’ and a quick excuse could jump to mind.

I made small determined changes and began to experiment with life’s choices. My previously ad-hoc ability to deal with fears became an almost scientific methodology for finding, categorising and working around them. So I started to do things specifically because they scared me.

Fear is not a good reason to not try something. It was better to act, even if the result was considered failure, than not act at all.

I built on that until I understood that fear is not a good reason to not try something. That it was better to act, even if the result was considered failure, than not act at all.

My big indie failure? Greenlight. I agonised over it. Eventually my training kicked in and my brain went into “it’s better to act and fail than not act at all, because in acting I will learn”. So I put up my best attempt at a description of the game and my best attempt at a video and eventually managed to hit the button faster than fear could prevent it.

I learned a lot in those first few weeks of Greenlight. Initially I learned that my description of the game was poor and that my video skills were worse. By the time I had learned to do a reasonable job I had already wasted thousands of votes.

As a learning experience it was amazing. Sadly with a 63 percent No vote and now only a trickle of new votes it was unlikely to be Greenlit.

Strange thing, failure. As long as you learn something valuable it doesn’t hurt. I broke new ground in terms of the skills I’d need for the long journey. I was better for failing.

28 years of inaction will simply fly by with the liberal application of the following excuses as you age...

These are all perfectly good and reasonable fears. They also happen to be terrible reasons not to try, not to explore, not to experiment with life to see if you can find a way to make it work.

For me it comes down to a lack of self belief leading to analysis paralysis. Instead of trusting future problems to my future self I’d try and solve all the possible outcomes and analyse them in advance. This fear disguised itself by making me believe I was a “sensible”, “cautious” and “risk averse” person. Is it any wonder I couldn’t make any choices?

The wonder came when I started to trust myself to be able to handle future problems without undue pre-analysis. To focus on what’s in front of me. To hear a fear whispering to me and, instead of taking it on board as fact, pull it apart and find ways obviate it.

Hello, real me, where have you been all my life!?

End at the start

I know exactly where I started to actively experiment with choices, not just indie dev’s choices. I changed the route I walked to work. As small and seemingly trivial a change it may seem it showed me the cage of fear I’d built around myself more clearly than anything since.

I walked down roads I’d never walk down. Why had I never even considered walking down them...

I walked down roads I’d never walk down. Why had I never even considered walking down them...

I took longer routes to explore and learn about the area. How come I’d not thought to do that before...

I took short cuts across grounds I had no right to be on. What I thought would get me into trouble now just looked like a harmless short cut across a car park. Why had I thought it was a problem...

Two years I’d been doing that walk and not once experimented with my route. Strange how well a routine walk highlighted a life lived in a cage of choice free routine.

So why not pick a route just to see where you end up? You may not succeed, but you’ll learn something. How will that help when you face those shaking, quaking, tearful, stomach churning times of dread?

AUTHOR’S NOTE: During work on this article the game was Greenlit.

Johnny Marshall (aka The Mighty Git) runs indie game development company Sock Thuggery, whose first game is due out when it’s good and ready ;)