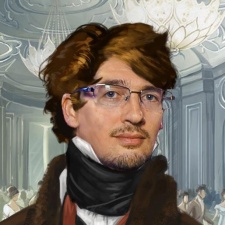 It's a historical romance set in England built around a fun, varied solitaire mechanic in which the female protagonist, Bella, upgrades her home's modest ballroom.

We knew that marketing a casual game to a wider audience - beyond the casual download portals - would be challenging, but we've learned a lot that we can share in this article.

However, we also sell direct on our website, but sales are paltry in comparison with those from the main casual distributors (less than 1 percent of total sales).

For this game, more than ever, we wanted to try to reach a wider audience: we wanted to funnel more people to our website to boost direct sales; we also wanted to see if we could get more people interested in a casual game like Regency Solitaire.

We didn't do much marketing for our last game, Spooky Bonus, other than sending out a newsletter, mentioning it on our Facebook page, and a few other bits and bobs.

Not surprisingly, the result was about 25 direct sales at launch, despite Spooky Bonus having grossed over $400,000 to-date on casual portals. We know that the game is good quality and that players love it - it's just that reaching them directly is super-hard!

This time we have tried a lot more things, and direct sales are over 80 in about five weeks. Whilst this isn't a big number, it's already twice the lifetime direct sales of Spooky Bonus. So something must be working...

We didn't do this with Spooky Bonus, and later found that someone was "cyber-squatting" on the Spooky Bonus Facebook page (thankfully this has now been resolved) - so watch out for that!

For casual games, I believe that Facebook is a better way to reach potential customers than Twitter - just purely because of the different demographics of people who use those platforms.

A handful of direct sales have come from Facebook so far and it's nice to interact with fans there too as they often tell us they have bought all of our games and love them.

Rather than trying to reach customers on Twitter, we've used it to reach YouTubers, Twitch.tv broadcasters, and to get support and advice from the dev community. People have been super-helpful in directing us to people who might be interested in covering the game.

Marketing a casual game is harder than marketing an indie game.

We've done four Twitch.tv and podcast interviews so far, and several smaller YouTubers have picked up the game for "Let's Play" videos.

This is new territory for us, and it seems to be working - we've seen comments on YouTube threads from viewers saying they have bought the game.

There are quite a few casual games on Steam, but it's not too crowded yet, and naturally we want to add Regency Solitaire because it's a quality title. So we created a Greenlight page and got the word out via Twitter, Facebook and forums.

Part of our bid to get attention for our Greenlight campaign was a photoshoot of us in Regency costume, to highlight the historical English theme of our game.

Whenever we mentioned Greenlight, we would also post a picture of us in historical costume - this generated a lot of retweets and favourable comments. Despite all of this, we've only just hit 500 votes (16 percent of the number of votes required to get in the top 100 Greenlight games).

Casual games used to mean downloadable PC/Mac games like Bejeweled and Diner Dash. But in recent years the meaning has shifted to free-to-play mobile games, which often attract scorn from mainstream press and players alike.

The "casual" label isn't doing us any favours in trying to get Greenlight votes or mainstream press attention.

I believe that marketing a casual game is harder than marketing an "indie" game because at least press and YouTubers are somewhat receptive to an indie game, and indie game fans can be reached more easily on Twitter and Steam Greenlight.

That being said, due to our marketing efforts, the game has been covered favourably by jayisgames.com and killscreendaily.com. We haven't given up yet!

Also during our marketing efforts we've been highlighting the fact that we are a husband-and-wife indie team who are passionate about our games and not some faceless corporation banging out soulless clones.

This has helped with getting interviews and getting people to share our posts and vote on Greenlight. The "real people" factor is newsworthy.

Here's something about our game - it's unashamedly feminine and likely to appeal to a largely female audience. We are using this to our advantage by joining forces with another website with a similar player base.

Our friend, Ola Rogula, at Doll Divine made an online dress-up game using some of our characters and backgrounds. The Doll Divine Dress Up Regency Bella game links directly to our Regency Solitaire sales page.

In just a few days, the dress-up game has generated over 40,000 clicks for us. This hasn't yet translated into many sales yet, possibly because this audience is used to free games.

However, it was still a fun project and a great way to raise the game's profile - plus a web game has a much longer tail than a banner ad, so we expect to benefit from it for a long time.

This marketing effort has been quite a lot of work, and has not yielded instant results. However, it has been far from fruitless as we have gained a lot of new contacts and experience along the way that we can apply to future marketing pushes for this game and new ones.

It remains to be seen whether this push will build momentum over the longer term. The small bump in direct sales compared with previous launches is cause for some optimism.

With approval on Greenlight and some of the major portal launches still forthcoming, we expect plenty of sales overall.

Of course for the true picture you'll have to check back with me in five years or so - games have a long tail and Regency Solitaire will be no exception.

You can get in touch with Jake Birkett via Twitter, or find out more about Grey Alien Games on the company's website.

Full Indie UK is a friendly group of UK Indie Game Developers who have teamed up to become friends, help each other out, and make great games.