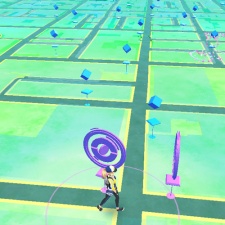 Since July 6, people have been walking around paying the kind of attention to their smartphones that suggests hypnosis, sleepwalking, or perhaps even zombie infection.

The reason, of course, is the release of Pokémon GO, a cultural phenomenon that marks a beachhead moment not only for location-based augmented reality gaming, but for marketers as well.

On July 13, Niantic Labs, the developer of Pokémon GO, announced the Lure Model, a feature that allows businesses to pay to attract more Pokémon - and thus, more Pokémon GO players - for a limited time.

Restaurants, bars, and other retailers are eagerly transforming themselves into PokéStops to increase foot traffic, and a bevy of recent stories suggest that the tactic is working to spectacular effect.

Reports suggest that certain retailers will also soon become sponsored locations, with brands such as McDonalds rumored to be developing a sponsored strategy.

What we are seeing here is a revolution in game advertising - the newest innovation since Unity Ads successfully pioneered a mechanism in which players gain a reward for watching video ad.

As with all revolutions, this one stands on the shoulders of innovations both in location-based gaming and mobile location advertising.

When I look at the evolution of location-based games - not to be confused with location-based entertainment à la Disney World - it's clear that there were few precedents for Pokémon GO.

Location-based games such as Ovi Maps Racing (2010) and Shadow Cities (2011) established a foundation, with the Digital Emmy-nominated Conspiracy for Good (Tim Kring/Nokia 2010) blending Hollywood and technology in one of the most audacious narrative large-location experiences ever delivered.

Niantic Labs has been working in this space for more than seven years, and founder John Hanke was at Google with Keyhole, a geospatial data visualization software development that Google purchased and used to bring Google Earth to life.

The first game that Niantic came out with was Ingress, easily the most successful location-based game experience before Pokémon GO came along to steal the crown.

It has been live for close to four years.

Niantic was well-positioned for success with Pokémon GO, not only because it was bringing a well-loved nostalgia brand to an innovative, new platform, but because of its prior experience.

Niantic used data that was originally created by the Ingress community to build the Pokéstops and PokéGyms.

It takes time to build the assets, apply the lessons, and build up the expertise to do something like Pokémon GO. Niantic used data that was originally created by the Ingress community to build the Pokéstops and PokéGyms and even tested sponsored locations with Ingress in partnership with brands such as Jamba Juice.

However, it would be wrong to think the use of location in mobile advertising breaks entirely new ground.

Companies such as Verve Mobile have a decade of experience working on the fundamental question of how to bring better engagement between consumers and brands by utilizing location to drive foot traffic.

This year mobile ad spend is expected to surpass $100 billion and account for more than 50% of all digital ad expenditure for the first time.

The reality is, if you do not use location in marketing, then all you are doing is digital marketing. And as Pokémon GO has shown so successfully, consumers and retailers alike are hungry for something more - and this is where location-based advertising's established history will come in handy.

The way for both mom-and-pop shops and the world's largest brands to succeed in mobile location is to reach a diverse - and very large - set of customers and generate premium demand, which requires quality inventory and contextually relevant messages for the audience.

At Verve Mobile, we have found that the best results come from having a highly targeted mobile Software Development Kit (SDK) which gathers relevant data in order to deliver the audiences with whom brands are looking to engage.

Last month, for example, we were able to geo-fence more than half a million locations in the United States alone, allowing brands to reach relevant consumers within these spaces.

Pokémon GO also uses geo-fences in the form of Pokéstops or PokéGyms, of which there are probably several hundred thousand if not millions.

During the beta test of Pokémon GO, the Ingress community indicated about a third had been imported.

Why bother to do all of this?

Here's just one case study to think about: Recently, Verve's efforts to target nearby shoppers resulted in a 124% increase in foot traffic for a toy retailer.

That kind of groundswell would probably not be possible using any other advertising method. The incorporation of a dedicated SDK to get device features and create a better signal makes it possible to develop contextually relevant content that pulls in customers more efficiently.

A location-based game using only its street address will point a player to a spot in the middle of the parking lot.

Yet, even with the most powerful SDK, it is critical to ensure that the Point of Interest (POI) - geek-speak for where you actually want people to go - is accurate.

Many third parties claim their points of interest are accurate, but getting a precise location requires a latitude and longitude coordinate, as well as the elevation.

Too often, if the location in question is a store at a mall, a location-based game using only its street address will point a player to a spot in the middle of the parking lot.

Niantic took this consideration to heart, and it's one of the key reasons for its success. The company used crowdsourcing and self-validation to create the locations that were used in Ingress, and then leveraged that data within Pokémon GO.

Now for the big question: What comes next? I expect to see more interest in location as the premier engagement platform for inspiring action and interaction.

What we see at Verve is that the extension and use of on-device signals, combined with a broad range of location information, both indoor and outdoor, will allow an increase in brand reach, foot traffic, and attribution.

Just as Ingress has enjoyed a life of 4 years (and counting), I expect Pokémon GO will be a long term experience with engagement mechanism for years to come.

I also expect that location-based marketing that links players with retail locations will become a key part of the gaming experience.

And then? I will share that while moderating the panel, "Let's get virtual!" at UX Speakeasy on July 20. Stay tuned!