Get the full package with the Honor 8 Pro

A look at what the Honor 8 Pro offers 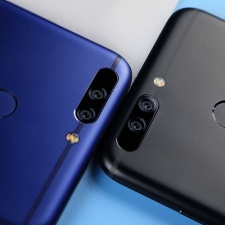 Honor released the Pro version of the Honor 8 in April, boosting the phone’s specs to outperform more expensive competitors like the iPhone 7Plus and Samsung S7 Edge.

Here are three reasons this slimmed down, suped-up Honor 8 ticks all the right boxes.

The Honor 8 Pro’s 12MB dual camera uses an algorithm to combine monochromatic and RGB images together in an instant, resulting in the perfect blend of sharpness and colour.

So whether you’re taking a snap of the cocoa sprinkle atop your Grandé Clapa-trapa-cino, or the snow sprinkle atop the Gran Paradiso, the Honor 8 Pro will do you proud.

The Honor 8 Pro boasts a 5.7” quad HD display, with 515ppi and support for approximately 94.5% of the NTSC colour gamut . That means games, videos and photos look beautifully vibrant and detailed.

The resolution is even good enough to be used with VR, and the box your Honor 8 Pro arrives in doubles up as a VR headset of your very own.

The Honor 8 Pro packs in an octa-core Kirin 960 chipset and 6GB of RAM to handle memory-intensive apps quickly and easily. It also has an intuitive UI that adapts to your usage habits.

And you won’t be in a constant panic to find the nearest charging port either – the battery holds an impressive 4000mAh of power in one full charge, despite the phone’s ultra-slim 6.97mm body.

This article is sponsored as part of Steel Media Preferred Partners.