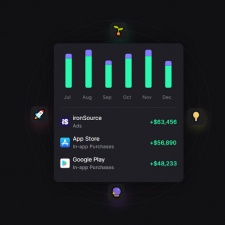 Fintech company Sanlo is aiding game and app developers with their financial tools, thanks to a new partnership with Stardust, the low code blockchain and NFT integration solution. The purpose is to provide developers with alternative-financing routes and Web3 capabilities.

The ambition is to provide developers with a way to focus on creating games, rather than raising funds.

Stardust COO Atif Khan said, “We saw synergy between Sanlo and Stardust in how we both empower developers and fuel the creator economy in gaming. The Stardust API technology gives game developers the tools to build on blockchain without the complexities, and the Sanlo partnership with Stardust can help enable them to scale without diluting creative and business ownership".

Olya Caliujnaia, CEO and co-founder of Sanlo, added: “Our goal is neatly aligned with that of Stardust’s. Both organisations want to support the gaming creator economy and empower developers around the world. We are beyond excited to be partnering with Stardust and to provide such complementary services to the gaming community. Together, we can equip the next generation of developers with the tools they need to thrive.”

Stardust, who also partnered with Tilting Point in March 2022 to bring blockchain access to indie developers, is trying to build on blockchain without the complexities.