A new flow: The making of Dark District 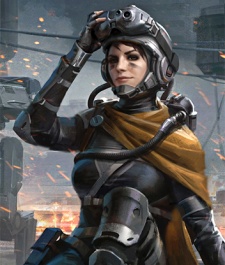 Following the success of Supercell's Clash of Clans, so many developers and publishers have entered the mobile strategy genre, the games have gained their own label - Clash of Clones.

US/Chinese publisher Kabam can't be accused of a cut-and-paste job when it comes to its entry into the market, however.

Dark District takes the fundamentals of the genre and streamlines them in terms of the gameplay loops, and look-and-feel; something we also looked at recently in a Monetizer column.

We caught up with the general manager at Kabam's San Francisco studio Nathan Germick to find out more about these decisions.

Pocket Gamer: The game is the first mobile title from Kabam's San Francisco studio, so can you give us some background about it?

Nathan Germick: The San Francisco studio has been responsible for some of Kabam's most successful web titles.

Many of the individuals responsible for that success have extensive backgrounds in console development as well.

The team behind Dark District is made up of a combination artists, designers, and engineers from our web teams as well as specific individuals with 3D, mobile, and triple-A game development experience.

Our goal was to draw upon our experience developing strategy games for the web and bring that into a high fidelity mobile context.

Why did you want to make a mobile strategy game and why the decision to go for a sci-fi theme?

Strategy games have always been a key focus for Kabam so this was a natural fit for us.

We specifically chose an art style and theme that both fit the gameplay as well as helped differentiate Dark District from other titles.

Clearly this is very competitive market with one very successful game and a lot of games competing for the #2 spot, so how much time did you spent looking at other strategy games?

As passionate gamers ourselves, we're constantly playing games and checking out the latest titles.

You decided to go for 3D graphics but not a 3D camera. Why was that?

The camera is 3D. It's most apparent when zooming in to view your base or to get a closer look at combat.

Future updates may allow for taking more advantage of the 3D camera such as adding the ability to rotate the view of your base.

One of the innovations of Dark District is to only allow one building task at a time, instead of using an unlockable multiplayer builder system. Why did you decide to take this approach?

This approach was derived from similar systems in our web titles. It was also informed by our desire to keep the UI as streamlined and uncluttered as possible.

Also the durations for construction tasks were specifically tuned to best address a mobile audience.

The UI for the game is very clean, giving clear visibility to what's going on. How many iterations did you require?

We went through at least a half-dozen distinct variations of the UI.

We wanted something that was both user-friendly and fitting to the futuristic sci-fi theme.

The game was developed using Unity for more than a year.

What were the biggest obstacles you had to overcome during the development?

The biggest obstacle was optimizing the high fidelity 3D graphics to perform well across a range of mobile devices.

Research plays an important role in the game. Why do you think this is an interesting action for players?

As players progress in the game, this provides a means for empowering the units they've unlocked.

Unlike many games in genre, Dark District doesn't have any incidental environmental elements around the base such as trees to remove for the chance of a hard currency drop. Why?

We wanted to streamline the overall experience and maximize the high fidelity performance of the game at launch.

We're happy with the foundation we've established and look forward to expanding upon the game in future updates.

Similarly, you don't visually show the player the troops they are building within the base. Why?

In the upcoming game update, players will be able to see the type of unit being constructed in the War Factory.

How did you approach creating the single player missions, and how important are they to encouraging retention?

The single player missions are designed to help the player learn to best utilize their units and how to optimize and improve their forces.

We know that a rich single player experience is very important to our players and this is an area we would like to expand on in a future release.

You don't have a star system for the single player battles, instead you use a mastery-style approach. What do you think this adds to the experience?

The intention is to encourage players to fully maximize their forces and improve their tactics in order fully dominate their opponent.

How have you approached the alliance system? What is its main purpose in terms of player motivation, particularly in the long term?

The alliance system exists to foster camaraderie, community and a sense of collective competition among players.

It also provides a social outlet and the opportunity for players to connect with one another. This is an area we will be expanding over time.

Did you learn anything surprising during the soft launch period?

The social features and alliance functionality are something players are hungry for and we'll be continuing to expand and improve upon these aspects of the game.

The game has also been particularly well received in China, which has been encouraging.

What elements of Dark District are you most happy with?

The art style, theme, and initial experience all resonate strongly with players.

The game's only been out for a month or so, but what's your view on the initial market reaction?

The positive response has been very encouraging and we're looking forward to expanding on the foundation we've created with the initial release.

We have exciting things planned for future releases and are listening closely to feedback from our players.

Can you talk about future plans in terms of features and/or events planned for future updates?

As mentioned before, first and foremost we're listening closely to feedback from our players and making sure to prioritize those features.

Areas that we're currently focused on are improving alliance features, expanding the single player campaign, and improving performance and stability.

Celebrate the holiday season next week with the industry at the Pocket Gamer Xmas Mixer!