Experts from AppLovin, Digital Turbine and ironSource give their thoughts and predictions for 2023 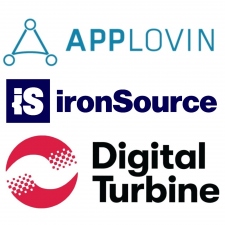 With 2023 stretching ahead what are the headline hot topics for mobile right now? Was 2022 a great year for mobile or did the transition to 'normaility' catch the industry on the hop? Most of all, what's going happen through the next 12 months that we can all look forward to and be excited by?

We caught up with major players from three of mobile's biggest 2022 movers to discuss the latest trends, how the year ended for them and what they're looking forward to through 2023.

GETTING CREATIVE WITH APP MONETISATION

"The gaming industry has always thrived on creativity and experimentation. The current economic downturn is forcing us to double down on this even more. As launching new gaming hits has become more difficult, we are seeing more and more developers take risks and be open to changing their previously winning formula. We currently see and predict that we will continue to witness the game industry developing in its monetization strategies. Whether it's adopting hybrid monetization, with IAP partners integrating ads, and ad based developers trying to crack IAPs, or new ad formats such as app open or native, I expect to see a lot of new and creative monetization strategies emerge in 2023."

"Social media platforms have driven a shift in how people consume media, and 2022 was the year of short-form videos. This format is becoming more prevalent in the ad creative space too - something which will only continue in 2023. The short length will challenge creative teams to grab attention faster than ever, and some of the ways we’ve seen them do that so far include using real people, leveraging humor more, and adding sound."

"In an uncertain economy, brands need to control what they can control. If consumer behavior shifts and sales slow down, brands that have a D2C channel like a mobile app have more levers to pull than those that don’t. They’re not dependent on someone seeing their ad, instead they can reach them through a path they’ve already built and developed. That’s why user acquisition for mobile apps will continue to be important – it’s so much more than a sales channel. You can experiment with expanding your product portfolio in a low-cost way, for example, by launching in the app first before committing to brick-and-mortar.”

“During any economic downturn, people are less likely to buy tech gadgets like brand new smartphones every year – that’s broadly true. But here’s what else is true: The ones who are still buying new phones and spending time in apps and making purchases are those that still have disposable income. They are the consumers you want to target anyway.”

“While inflation and economic challenges are top of mind for everyone it’s important to remember the cyclical nature of the macro economy. During down times we tend to return to fundamentals, which in this industry is about creating value for customers and partners and ensuring that supply and demand is always efficiently connected. Rather than get caught up in the swirl of headlines, in 2023 a sustained focus on problem-solving, execution, and delivering results will position advertisers to benefit from the upside of the next phase of the business cycle.”

THE FUTURE OF MEDIA

“We are now clearly in an era where anyone can be an ad network. That is, everything that has eyeballs has the potential to be commercialized. We’ve seen it in the rise of retail media (Amazon, Walmart), streaming video (Netflix) and journey ads on Uber. And there is - theoretically anyway - little to no issue with privacy, because it’s first-party data and stays within those walls. The question now is, will it be a significant source of revenue for those companies – and will consumers be okay with it?”

“With the rise of TikTok it’s become clear that the younger generation is really in the driver’s seat. And they have an entirely different mindset when it comes to data privacy and value exchange. As the size of this cohort increases in share of population with buying power, the conceptual idea of privacy will melt away and be replaced with a more pragmatic approach of value exchange.”

“For the past seven years we’ve been in a YouTube-first video market. But now I’m seeing, for the first time ever, advertisers go to TikTok first. It’s hard to argue the size and scale of TikTok and the amount of time spent on average, compared to other platforms like Snap and Facebook. And it’s a sit-back-and-immerse kind of platform for entertainment, unlike others that are more positioned for communication. That’s why I think TikTok, barring an FCC intervention of course, will continue to win in terms of mindshare, power and distribution. Outside of search, we’ve seen very few lean-in experiences get this big.”

“For some brands they launched or grew their mobile app during the pandemic because it was a necessary sales channel, a way they could reach customers directly. What I see happening now is those brands realizing how fruitful that direct relationship is and leveraging it in other ways.”

“Consumers are tired of walled gardens being in control of or limiting their choices. In the coming year, if regulatory forces like the Digital Markets Act in Europe force Google and Apple to fully comply,and create an opening for alternative app stores, we may just see how hungry consumers have been for an independent solution that is not tied to their hardware.”

App and content discovery will soon no longer be limited to the app stores. OEMs and carriers are perfectly positioned to provide pre-loads and app recommendations. If they can successfully execute on the data lake available to them, they can customize content in a revolutionary way when it comes to app discovery and again become a trusted source for consumers.”

“Now that the size and speed of mobile networks is commoditized, carriers and OEMs are going to have to compete in other spaces, like software and services. We will continue to see competition heating up to provide more content and promotional bundles, like NFL, Disney, and other video content subscriptions rolling into a carrier contract. What’s interesting is that those promotions and incentives may ultimately be surfaced and accessed through that carrier’s app store, which will even better position carriers to become the gatekeepers to premium content.”

“App developers are forced to share a large percentage of in-app-purchase revenue with platform holders but there are changes on the horizon. In many countries around the world regulators are starting to force the Apple/Google duopoly to support alternative payment options and app stores. In the coming years we’re going to see big changes for app developers on how they distribute and monetize their apps. That’s the kind of on-device empowerment we hope to see more of in 2023.

Before iPhone and Android Smartphones, Carriers used to run and operate digital storefronts. We think there is a huge opportunity for Carriers to reclaim that spot in the value chain. And it’s been building for years, with the foundations for this sea change now forming. Between regulation, first-party data and on-device technology that enable publishers to monetize and reach the right users, Carriers and device OEMs are in the pole position for the next phase of the mobile app ecosystem.”

“Over the past few years, we’ve seen the third-party ecosystem diminish and first-party data become more and more valuable. What will be interesting to track is how publishers and platforms are managing it. Yes, it’s valuable. But without their own ad-tech infrastructure, many are struggling with how to commercialize and create these potential additional revenue streams. In 2023 we will likely see a few case studies for how to do so effectively, and a few cautionary tales of how to not.”

“Looking ahead, consumers will start to realize that lack of data results in bad advertising, and they may start to get annoyed. Even just in the coming year, or into 2024, we may see a massive shift in consumer demand for relevant ads. If any tide will change, that one is coming soon.”

“Currently so much in data and privacy is happening at the regional and state level, and that’s not just sustainable. As a tech company, having to implement privacy-first solutions in so many different ways is confusing and inefficient for users, and sometimes contradictory. In 2023 I hope we’ll see more clarity and unification on regulatory guidelines and best practices that the industry can understand and adhere to.”

“Tech companies that can leverage data signals from multiple sources will be able to achieve more accurate data targeting. In 2023 it will be all about blending first-party data with robust, third-party data in a way that is privacy compliant.”

“Targeting is still essential for creative campaigns to make sure you’re reaching the right audience at the right time. But with cookie deprecation and all of the mythical targeting techniques and workarounds that the industry has created now going away or failing to gain traction, brands must go back to the basics. Story-based creative, delivered in a way that demands and achieves attention, carries far more weight.”

“My hope is that in 2023 viewability as a metric will move to the side as the de facto success metric for brands. Why? Because viewability doesn’t correlate to actual effectiveness, though it has its use as an anti-fraud tool. Our Industry must move beyond viewability and focus our attention on… attention. Was the ad viewed, or was it seen? Attention metrics tell us if the ad had a chance to really register with the user, psychologically.”

“Just as the Old World metrics like impressions are considered wildly outdated today, measuring success by two-second views is completely insane. The question we should be asking is, Was my video seen by a human being, in a way that they can fully consume it, and then take action? That’s all that matters in today’s attention economy. It has to be given appropriate airtime, and it must be high quality. After all, if we want someone to “pay attention,” we have to give them something worth paying for.”