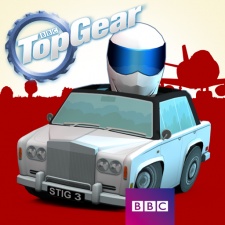 Some people say that the only way to get a million downloads in the App Store without spending a dollar on user acquisition is by praying to Shirley Bassey's haircut.

Others think the only way you can get their by stroking Richard Hammond's chin while chanting 666 backwards.

All we know is that The Stig from Top Gear seems to be able to do it fairly easily without having to bother with all of that nonsense.

Back in March, Supersonic Games, through publisher AppyNation, released Top Gear: Race The Stig onto the App Store.

In the game's first six days, it amassed more than a million downloads - the kind of acceleration that most app developers could only dream of - hitting top 50 positions in UK, Spain, France and Italy amongst others.

The question that will spring to mind to any developer reading this right now, however, is how did the studio achieve this, and what lessons can we take from it?

Pete Williamson, co-founder of Supersonic Games, took a big role in the launch of the game. Talking to him about the launch of the title, he told us about how this wasn't the first time the company had launched a game tied to the Top Gear brand.

This was, however, the first time the studio had made it in a truly mobile friendly way.

"We developed Top Gear Stunt School Revolution for the BBC over two years ago," opened Williamson.

We wanted to make a really accessible, instantly fun game.

"That did really well, so it was quite a natural thing to move on to another title based on Top Gear. Although Stunt School Revolution did well, in some ways its design was more old-school console [a reflection of Supersonic's console heritage]. We wanted to learn from that and make a really accessible, instantly fun game.

"The Stig is obviously a massive part of Top Gear and the idea of racing against him is really appealing – who wouldn't want to do that! Combining that with an infinite racer mechanic seemed like an obvious thing to do."

Of course, the decision to go for an infinite runner mechanic could have been something of a double edged sword. On the one hand, the mechanic is so well recognized by most players that it can be easily picked up by most players.

But on the other, it's also been strongly explored by an enormous number of titles with only a handful of games like developer Ian MacLarty's Boson X really entertaining.

What Supersonic did to get over this problem was to leverage the Top Gear brand.

With the rebooted version of the programme (now nearly a decade old) still drawing significant audiences for their audacious challenges, a surprisingly rich seam of character within the show's lore made it easy for the team to inject a surprisingly large amount of character into the title.

Indeed, Williamson noted it was a conscious decision the team made to inject the game with that character.

Can I have some more?

Pointing to the fact that the basic car you get in game is based on Oliver, a vehicle that Richard Hammond fell in love with in 2009 during an escapade across Botswana, Williamson emphasised that cramming character into the game was one of the team's important missions.

"That was really important to us, to the BBC and to Top Gear in particular," he continued. "Aside from the cars, there are loads of often subtle references and nods to the TV show in there. If you're a big fan of the show you'll spot them."

It's that which starts to get to the heart of this successful launch. While an infinite runner is not necessarily the freshest experience in mobile gaming, a tightly constructed title with character and strong branding still has the ability to find a market. Despicable Me 2: Minion Rush proved this as one of the biggest free-to-play titles of 2013, by delivering a strong game on the back of one of the hit movies of the past year, and its heavily branded success story resonates strongly with what Top Gear: Race the Stig experienced.

The business model doesn't dictate that we have to try to grab money from our users on day one – quite the opposite.

It's clear that the branding and the reach of the show clearly helped the title to serious exposure levels. Talking to Williamson about the launch, it was clear that a lot of effort was put into ensuring that the game took advantage of the clout of the company pushing it: the BBC.

"Lots and lots of time was spent on the launch," he detailed.

"The Top Gear brand has great reach and BBC Worldwide has lots of routes to promote and market the brand through TopGear.com, to The Stig's Facebook page, and through various international websites.

We also worked hard to ensure the platform holders - Apple, Google, Amazon, Windows - knew about the game and had everything they might need to promote it."

As Williamson outlined these efforts, it's clear that the central pillar to this success was this heavy emphasis on an established brand that had real reach. Asked what he thought the reasons were for Race the Stig crossing the million mark in a week, Williamson broadly concurred with that theory.

"It has a great brand," he opened, "and it benefitted from focused launch marketing and was an engaging game with broad appeal."

So it turns out that building your brand on a globally watched TV show that still gets over five million viewers a week in the UK alone is a sensible way to lay the foundations for strong organic growth.

In fact, according to Williamson, the entire traffic that they gained for the app so far has been organic, which raises an interesting question – just how well did the game do solely on organic traffic at launch?

The answer is a bit hard to tell. According to Williamson, Race the Stig's monetisation mission "very much follows the Game-as-a-Service model, so the business model doesn't dictate that we have to try to grab money from our users on day one – quite the opposite."

But the signs seem to be that this organic audience is proving to be highly valuable to Race the Stig. While he was keeping his cards close to his chest about retention and monetisation for now, Williamson was keen to emphasise that the user quality for the game was high.

"Organic users are usually high quality – we didn't coerce them into downloading the game, so the fact that they already showed an interest means they're likely to continue with that interest. Our reviews are pretty solidly near the 5/5 marks, so people seem to be reacting well to the game."

By releasing a tight game with strong branding and securing those strong reviews, Top Gear: Race the Stig is likely to have a strong ASO base to build upon that will, in the long run, deliver savings to any forthcoming UA strategy the company is considering enacting over the game's predicted two year life span.

It's fair to say that leveraging a brand on the App Store only works well when you have a strong core product that follows best practice in the mobile industry to get there. It's all well and good saying that branded titles are the way forward, but anyone who had the misfortune to play Thor: The Dark World - The Official Game game will know that in gamers can still smack a brand down if it misfires.

That leads us into one final piece of advice gleaned from this little case study, which is to avoid those disasters to use a brand that works. Talking to Williamson about this, he agreed that some properties will work better than others – particularly those capable of doing something a little bit different.

"We've worked with a few brands over the years, some worked really well, some less so," he concluded. "Top Gear is great because as well as being an incredibly strong brand it's truly unique. There isn't anything else like it in the driving genre, which really helps games based on it stand out."

Top Gear: Race the Stig's early success that attaching a game to a brand captures the attention of users – it's a logical and effective way to build a big audience off the bat. By focusing marketing through jointly branded channels and reaching fans, it's more than possible to use word of mouth to spread the word without necessarily needing to pour thousands of dollars down the great Sarlaac of performance marketing.

It's a lot easier to do that, of course, when you've got The Stig (or one of his lesser known cousins) appearing in your game's trailer, that's for sure.