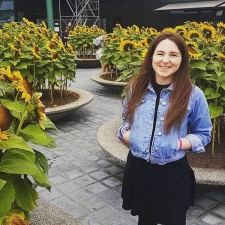 In the lead up to International Women's Day - taking place on March 8th, 2020 - PocketGamer.biz is spotlighting a number of women from the games industry under our Jobs in Games series, all this week.

Each profile will bring along a certain set of expertise, a different background, and a wealth of knowledge to be shared with all. Most importantly, for women looking to join the industry, there'll be some key information on how to get started, and vital bits of advice for making the jump into games.

Today we are speaking to Chucklefish external producer and Girls' Game Lab director Caoimhe Roddy about what game courses could help set you up for a role in the industry, as well as what issues firms need to address to help with diversity.

Caoimhe Roddy: My current role is as an external producer at Chucklefish. My job is primarily to support the publishing teams and external partners working with the company. I have calls with different game development teams, help them plan sprints, milestones and organise their timelines, while also coordinating localisation and QA for the teams.

Seeing developers create something that players love is amazingly fulfilling for me. I feel like their number one fan supporting them from the sidelines.

It's slightly different to how some publishers use external production as my day-to-day with some teams is working quite closely and helping them to figure out every problem that comes up in development. On the other hand, different teams just want high-level production support without day-to-day planning. I'm also involved in onboarding and reviewing the pitches that come into the studio alongside the marketing team

After university, I applied with some of my classmates to the UK Games Fund's Tranzfuser program, where we had to make a prototype and pitch it with a business plan over the summer after we graduated. I initially started as an artist on the team but became really interested in production and business development.

We ended up getting funding to start as a studio. After that, we tried to develop our own IP while doing contract work. We closed down the studio sadly due to our inexperience, as well as everyone wanting to move into more established studios. I went on to become a freelance producer and supported myself financially with lecturing while I picked up clients. I ended up being contracted by Chucklefish in May 2019 and have been with them ever since.

I knew I wanted to work in the games industry, but all through university I had almost no confidence in my technical or creative abilities. I'm really glad that I ended up finding production because I'm not sure I would have stayed comfortable in the games industry otherwise!

I studied games design at Futureworks and graduated in 2016. The course showed me a lot of different areas of game development but the most valuable resource I learned from the university was being taught by the crew who operate at White Paper Games.

Joining six months before the launch of Ether One, I was able to see the efforts a small indie team puts into the launch of a game, which really put the realities of working in the industry into perspective.

I love to work with small teams! It can be difficult for developers in the thick of a project to see the big picture and feel like they're adding value to a project. My job is to help developers stay on the straight and narrow to achieve their goals in a manageable timeline while within their means.

Seeing developers create something that players love is amazingly fulfilling for me. I feel like their number one fan supporting them from the sidelines.

It really bothers me that people think getting women into games is somehow forced. I co-run an organisation called Girls Game Lab and we always get messages and comments that we're forcing girls into games and not letting them develop an organic interest. We are helping organic interest!

We're supporting and letting them explore a new hobby! No one is making us work in games. We really really want to be here! We just need people to stop making it so difficult to exist in game development spaces.

People seem to love telling me how I could do things better. I work to my limits almost constantly by working, running an organisation and doing a Master's degree. It's really frustrating when people suggest I could be doing more or asking why I'm not involved in other initiatives.

We need to focus a lot more on equity rather than equality when it comes to how we attract and retain people in this industry.

This is mainly true at games industry events. People don't mean to be spiteful or purposefully difficult. I think they're trying to be constructive and supportive, but it's definitely damaging to my self-esteem and reinforces the idea that I need to work harder. I have to remind myself I go above and beyond in a lot of elements of my work.

I wish I had been told to use events to make friends rather than network and gain industry connections and allies for work/business purposes. This particular kind of networking is drilled into students in quite a cold way, and it's reinforced by a lot of people in the industry.

This has subsequently meant I’ve previously been exhausted and a little burned out by conferences. I'm taking a break this year, but I've learned from the prior one to utilise the events more to meet with friends I don't see too often. Last year I developed a much healthier mindset towards going to conferences and get a lot more from them without exhausting myself.

We need to focus a lot more on equity rather than equality when it comes to how we attract and retain people in this industry. The idea of treating underrepresented groups working in games the same as everyone else is outdated and we know it doesn't work.

Companies need to start being more flexible and proactive about what they can do to make working for them as effortless as possible. Things like flexi-time and remote working options need to become a lot more prominent, and with the tech we work with day-to-day, our industry is more than well equipped to do so.

Meet other women and connect with them. This is super difficult if you don't have the avenues to meet women face-to-face, but some of the people I've connected most within the industry were via Twitter. More people are also creating local meetups for organised groups such as brunches and drinks. I've started a Brunch Club in Manchester lately and I've been able to connect with people I never would have met otherwise!

Having the experience of other women working in the industry is invaluable for advice, keeping safe and even going off on rants with someone who understands your experience.

PocketGamer.biz will be releasing a new profile every day this week to celebrate International Women's Day 2020. You can keep up-to-date with them all here.

Women in Gaming: Kitfox Games' Victoria Tran on shifting from healthcare PR to the games industry