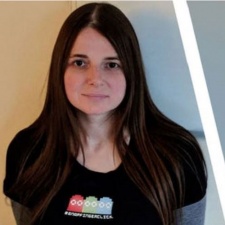 For today's spotlight, we spoke with Snap Finger Click design director Joanna Haslam, who started out in the games industry on the BAFTA award-winning Buzz franchise, before moving onto several mobile titles including Furby Boom, Enigma Express and the official Fantastic Beasts game.

During PGC Digital #6, Haslam will appear on two panels:

Joanna Haslam: Snap Finger Click is a small independent developer that specialises in making party games that can be played both in the living room and online over streaming platforms like Twitch.

I was part of the original team that joined when the company was founded five years ago and many of us met when we were working on the Buzz quiz franchise.

Since then, we've gone on to make several games including the official Family Feud game and a trivia game played with smartphones as the controller called It's Quiz Time.

Everyone who works at Snap Finger Click is passionate about multiplayer and we're currently working on a sequel to our M-rated party game Awkward. We primarily develop games for PC and console.

As design director, I oversee the design of all Snap Finger Click games. Being a smaller team, I tend to take responsibility for most things from the initial concept to the GDD and game balancing.

Working in games wasn't my original plan. I actually wanted to be a journalist when I first left university, and my first job was working as a producer for the BBC. I've always been passionate about media and technology so games ended up being a natural fit for me.

Working nine to five in a studio every day isn't an option for me - and I've seen it drive many other women out of the industry because they weren't able to find flexible work.

I joined the games industry to work on the Buzz quiz franchise - a job I loved because it involved working on a game that was made in the style of a TV show and felt like a real mixture of media.

I also enjoyed making a game for people who wouldn't necessarily call themselves 'gamers' and that's something I've kept with me throughout my career.

I think it's important to understand what making games really involves and what the different jobs entail. I recommend looking at real job adverts for roles and seeing what skills they require, then find the right university courses to learn those skills.

It is possible to join the industry without going to university, but having a degree certainly helps and gives you more options. Attending conferences like Pocket Gamer to meet people and find out about different games studio is also really valuable.

The pandemic has presented some interesting challenges. Snap Finger Click has always been a big pioneer of flexible working, so moving to full remote wasn't too much of a change for us. Obviously, we do miss seeing people, but the transition was far less disruptive than for those companies that were never set up for people to work from home.

I've personally been happy to see many game developers prove that working from home is possible and can even be a positive thing. I have a young daughter, so I have to fit my working hours around looking after her.

Working nine to five in a studio every day isn't an option for me - and I've seen it drive many other women out of the industry because they weren't able to find flexible work. I see the pandemic as an opportunity to revolutionise the way game developers work with it becoming standard in the near future to choose your own hours, have work from home days, or even work part-time.

I'm expecting a slow down in triple-A releases as larger companies have adjusted to the pandemic. Many games have already announced their delays and while some might think 2021 is going to be a difficult year, I'm looking forward to seeing the lesser-known developers have a chance to put their games in the limelight.

I also think the pandemic will influence features in games and we might see more options to play games together over video conferencing technology like Zoom.

There's been a real explosion of smaller game developers, which wasn't easily possible when I first joined the industry in 2008.

Back then, your choices were limited to medium and large developers and you'd likely have to relocate to one of the hubs like London, Brighton, or even to another country. These days, almost anyone can make games and set up their own company.

You can develop for a range of platforms from mobile to console. That gives a great opportunity for people who've found it hard to break into games, giving them the choice to make their stuff. There are some seriously impressive indie games out there at the moment that you just didn't see 10 to 15 years ago.

Which part of the Connects event are you most looking forward to?

I'm excited to see the introduction of Careers Week. Job-hunting is hard enough in normal times and without being able to connect with people face-to-face, this is a great opportunity for people to find their dream role.