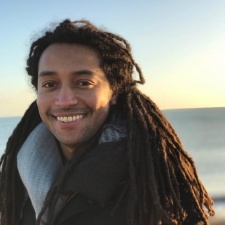 Markus Heinel is a game artist at Nitrome.

This week, we spoke to Nitrome game artist Markus Heinel about how talent can come from anywhere, learning to accept criticism and the implications of Brexit on the games industry.

Markus Heinel: Originally, I joined as a pixel artist in 2008 at Nitrome, but my role has evolved over the years. I'm pretty much an art generalist now; I draw, animate characters and create marketing assets for our games.

Every game artist should know how to use Photoshop by default.

I kind of fell into it. Nitrome wasn't originally a mobile games company when I started, I came in during the 'Flash' days. The company eventually moved on to mobile a couple of years after. I was just along for the ride but it was the best decision I think we made.

Being passionate but also learning the right tools for the job. As a standard, every game artist should know how to use Photoshop by default. If you want to work on pixel games, my software of choice is Pro Motion NG.

It also helps to dabble a little in 3D software, like Maya or Blender, which is free. Having a basic understanding of game engines is starting to become a necessity too. The great thing is that two industry-leading engines, Unreal and Unity, are free to learn.

I studied traditional animation many years ago at the London Animation Studio, followed by a 3D course with Escape Studios. It's definitely worth doing some sort of course where you're surrounded by like-minded people who encourage one other and show off projects.

It's also beneficial to learn from a tutor who has knowledge of the industry and can really help you get to where you need to.

I think certainly hiring more people of colour who are great at what they do is the way forward. There is so much talent out there.

At Nitrome, we're a pretty multinational studio which is great. Companies need to understand that talent can come from anywhere, and if you don't want to hire that talent because of skin colour or gender, then you're not going to be making the best games with the best people you could have had.

Personally, understanding the software the company uses and their pipeline. Hence, why I think it's so useful to keep learning whatever popular software you can.

As long as you have the internet, you can literally become an indie games developer if you are passionate enough.

The first company I worked for literally dropped a giant textbook in front of me to study 3D studio max which was daunting. When I began working for Nitrome 13 years ago, I always thought of myself to be a pretty damn good pixel artist, until I met actual great pixel artists working there. I had so much learning to do! Just remember to always be humble and learn from your peers.

That's a tough question. I think the fact that we have a class issue doesn't help. In my case, I recognise I came from a privileged background. But of course, this is not the case for a lot of people.

I was lucky. I enjoyed a great education which gave me opportunities that led me to study animation but I think these days things are a lot different. There is so much software available out there to the public for free, people are creating their own content for YouTube and making small indie games in their bedrooms. As long as you have the internet, you can literally become an indie games developer if you are passionate enough. It's really down to the individual.

Of course, seeing people of colour in positions like game director or game designer is inspiring for someone wanting to get into games. I can't even think of one black game director off the top of my head, so there is an issue.

Perhaps it starts at the top. Those hiring have to be willing to hire people from diverse backgrounds. I think most companies want diversity these days, but most of what you get [in the industry] are white males posting their resumes and there's nothing wrong with that either. At the end of the day, it's just people looking for a job.

Companies need to encourage diversity by putting in an effort - for example, going to graduate shows and seeing student portfolios. Making sure to pay attention to the kids who don't get much of a chance and actually helping out and giving pointers to how they can do better.

If I'm honest, I haven't seen much change… yet. I'm sure it will come but I think companies and people, in general, are becoming more aware of the issue.

Do you think the implications of Brexit will make it better or worse for companies trying to hire more diverse picks?

No one can deny the toxic language and narrative that hitched a ride with Brexit.

No one can deny the toxic language and narrative that hitched a ride with Brexit. In particular, the catchphrase "focus on British values" was thrown around a lot, which I felt was used as a trope for those who were privileged enough to be white and born in this country.

But in the same instance, COVID-19 has forced many industries to recognise the value of freelance and remote workers, which could open the doors for people who may not have had these opportunities before.

Currently, at Nitrome, we've hired people from various countries such as Brazil, Spain, India and many more as freelancers. We take an interest in people from any part of the world who are just really good at what they do.

Don't worry too much about your background or what you look like. Just be a lover of games! Learn by playing and studying mechanics or as an artist take time to look at character models or textures.

With Unreal Engine or Unity, you can literally become your own one-person game studio, if you have the drive. It's not an easy industry and there's a lot of competition but always stay positive - and listen to critiques. Good work will always get noticed, it just does.