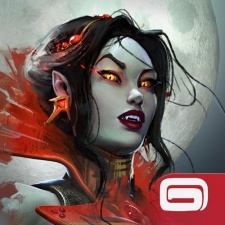 This week, we spoke with Gameloft game manager Damian Damianov about how Heroes of the Dark is a game all about the players and the difficulty in making a hybrid video game.

PocketGamer.biz: Where did the initial idea for Heroes of the Dark come from?

Damian Damianov: Funnily enough, the original idea for a 4X game about vampires, albeit in a different shape and form, was conceived in Transylvania, at Gameloft Cluj.

Although that team took on a different project instead, a strike force of their super talented artists found their way onto Heroes of the Dark, and have contributed a sizable part of the most beautiful art you see in the game today.

Heroes of the Dark is Gameloft Sofia’s fifth strategy game. A high production value, bold, disruptive take on the strategy category, and a brand new IP, it’s possibly our most ambitious and challenging product yet.

Heroes of the Dark is a bold, disruptive take on the strategy category.

The concept is a unique blend of strategy and RPG DNA, combining brand new ideas, key learnings from previous projects, market research, and of course, mechanics and paradigms we ourselves love and appreciate as players.

Core development took around two years. A serious amount of ideation, worldbuilding, visual development and market research took place beforehand, and in parallel, the engineering team laid down the foundations of our future persistent online world.

Although most of them are based in Sofia, we’re very fortunate to be able to tap into Gameloft’s global talent pool, and our team is distributed across different studios, countries, and even continents.

We knew from day one that the bold, ambitious strategy RPG hybrid we set out to build comes with significant risk. Building a brand new IP with a strong identity, a persistent, real-time-3D, server-authoritative world, are all pretty high on the complexity scale, but what’s kept me awake at night the most, is the unique and hybrid nature of the product.

Hybrids are tricky. A very fine line between the best and worst of both worlds. One misstep and you end up with a confusing mess of incompatible ingredients, a niche product for no one. Scary!

What’s kept me awake at night the most, is the unique and hybrid nature of the product.

With that in mind, we stayed extra vigilant throughout the process. We built out the riskier parts first so we can prove out the formula, and allow time to pivot if necessary. Conducted a ton of research on the high concept, art style and setting, and we put every major milestone build through a lot of playtesting.

It’s been an incremental process of improving sentiment in user testing, internally within the team, and for the senior editorial team at Gameloft HQ.

We focused disproportionately on the core gameplay and fun factor. As guided by our user research team, before measuring whether the game is fun or not, we had to ensure players ‘get’ it. Once usability clicked, we were able to focus on actual enjoyment, and when the first 10/10 ratings came in, we knew the game’s got a chance.

Most importantly, being live has presented us with multiple quantitative data points which, combined with player feedback and user research, have been invaluable to us for making massive improvements to the ecosystem.

4X games are sandbox experiences, and delivering exciting new gameplay and flavour to players on a regular basis is absolutely critical for strong engagement.

Having operated live games for more than 10 years, we have an arsenal of live ops frameworks and tools that allow us to run live events, update assets, push out balancing improvements, and deploy new offers on very short turnaround times.

We usually build out our live-ops calendar to bi-weekly cycles, but stay reactive throughout, deploying improvements and optimisations as often as a few times a week.

We’ve got a backlog of over 100 features and quality of life improvements we’d like to introduce, but at the end of the day, it’s all about the players.

We built Heroes of the Dark for them, and their feedback, either direct or through their actions and engagement in-game, is instrumental to how we define our priorities. Deep and meaningful social gameplay is always at the top of the list, and Raid Bosses may be on the way, who knows?

What in-game events are you planning in the future for Heroes of the Dark?

Joking aside, we’re going live this Halloween, and while the whole game is Halloween-themed by definition, we’ve got a full chain of Halloween events slated, including brand new content, bad-ass new heroes, and a bunch of surprises to welcome all of our new players into the world of Tenebris.

Beyond that, we’ve got a robust and flexible framework that we’re constantly expanding so we can continue to introduce exciting new events.

There are some mindblowing products in the works, and while I can’t get into specifics today, keep an eye on the big & established platforms, but also up-and-coming cutting edge hardware, platforms and business models.

You can pre-register for Heroes of the Dark on Google Play now.

Duck and cover: The making of Brothers in Arms 3: Sons of War

Gunning for glory: The making of Modern Combat 5: Blackout