Motorola remains in charge of US market, says comScore

March 11th, 2010 - 10:57am
By Keith Andrew
Motorola remains the dominant mobile original equipment manufacturer (OEM) in the US, taking change of just under 23 per cent of the market.

That's according to the latest figures acquired by marketing research firm comScore's MobiLens venture. The findings report that Motorola's share has slipped slightly, however, dropping by 1.2 per cent since October.

The latest MobiLens report details key trends in the US mobile industry between October and January.

Though the statistics place Motorola in the lead, they also suggest it's a tight race at the top, LG and Samsung tied for second place on 21.7 percent. 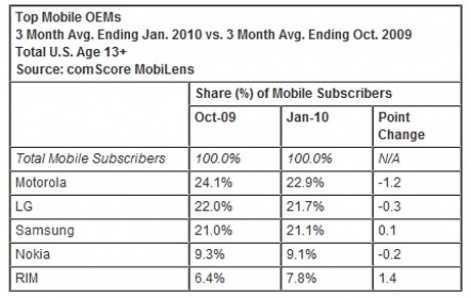 While that represents a minor rise of 0.1 per cent for Samsung, the biggest mover overall is BlackBerry manufacturer RIM.

Its share has climbed by 1.4 per cent to 7.8 per cent in January, although it still remains the smallest party of those surveyed.

However, it remains in charge of the smartphone market, BlackBerry handsets taking a 43 per cent share of all subscribers according to comScore's figures.

Apple is the second biggest player, way back on 25.1 per cent, while Windows Mobile appears to be dropping like a stone in the run up to Windows Phone 7's release, its share falling by 4 per cent to 15.7.

Google is the biggest mover in this market, Android now the fourth most popular smartphone OS in the States.

While it only accounts for 7.1 per cent of the market according to comScore's stats, its share has more than doubled since October. 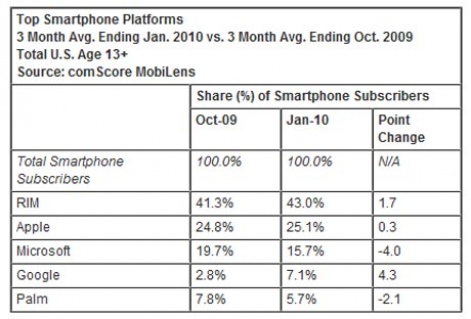