Free apps make up 60% of Android Market, paid apps the cheapest on Palm

September 2nd, 2010 - 06:30pm
By Keith Andrew
Android Market continues to offer the best value for consumers according to the latest report from Distimo, with the firm's figures claiming it has the highest percentage of free apps and some of the cheapest paid apps available on any mobile marketplace.

The firm's numbers for July suggest 60 percent of Android Market is made up of free apps  that's an increase of 3 percent when compared to May's figures.

It also puts the marketplace completely out of step with its rivals.

Palm's App Catalog is the closest competitor with 31 percent of its app line-up available without charge, Apple's App Store for iPhone coming in at 26 percent. 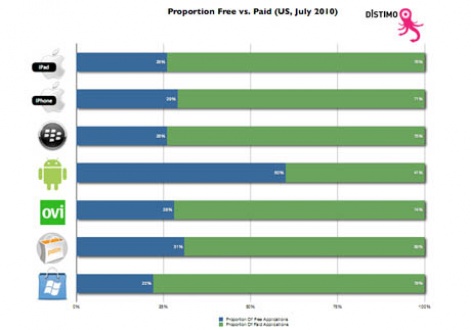 Even when it comes to paid apps, Android Market is still one of the cheapest places around, with the average price in the US in July coming in at $3.23. 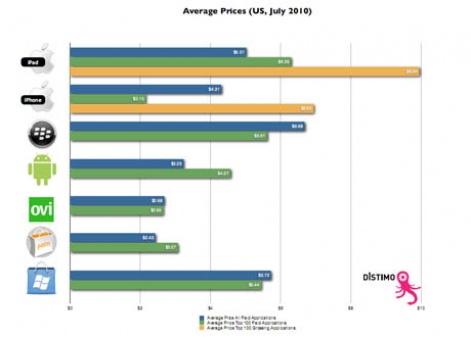 The reverse is true with most of the marketplaces, the average price of the top 100 paid apps on iPhone $2.15, compared to the $4.31 average for the entire line-up.

However, more than 60 percent of apps on the App Store for iPhone are priced $2.00 or less, the same true for Android Market, Ovi Store and Palm App Catalog.

As in previous reports, both Windows Marketplace ($5.72) and BlackBerry App World ($6.68) have comparatively high average app prices  BlackBerry still restricted by a minimum price point of $2.99 at this point  with the App Store for iPad the third most expensive marketplace with an average price point of $5.01.

The other notable trend in Distimo's July report is the increasing prevalence of the bigger publishers.

Though mobile marketplaces are traditionally the stomping ground of independent studios, the firm's numbers suggest Gameloft, EA and Handmark are now the top three cross-store publishers in the mobile market. 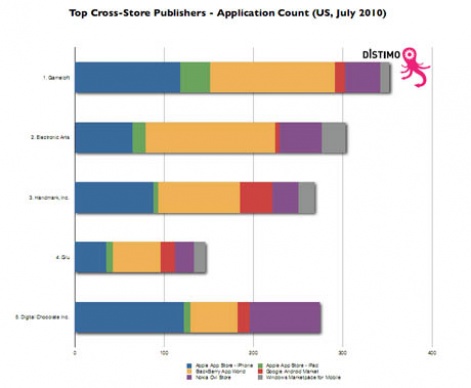 On the three most expensive marketplaces, first party apps appear to be enjoying a sizable amount of success, with Distimo reporting Apple (on iPad), RIM and Microsoft are the top publishers in their own stores with only a limited number of applications.

EA is the top grossing publisher on iPhone, with Clickgamer (Chillingo's 99c label) top dog when it comes to sheer number of apps available. 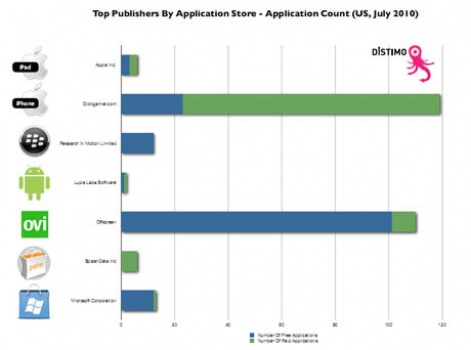