Rubs it in with claim of rival GetJar's decline

August 19th, 2011 - 08:02pm
By Jon Jordan, Contributing Editor
It seems there's a battle brewing when it comes to app stores.

Notably it's picking a fight with GetJar, which is its most direct competitor in terms of being an open, cross-platform app store, although GetJar pulled back from white label activity in April.

Noting that GetJar's download figures have declined 37 percent between July 2010 to July 2011, Appia compares this to its increase of 2,282 percent.

This also compares itself with the growth rate for Android Market at 728 percent, 347 percent for Ovi Store, around 200 percent for BlackBerry, and Apple's App Store at 91 percent. 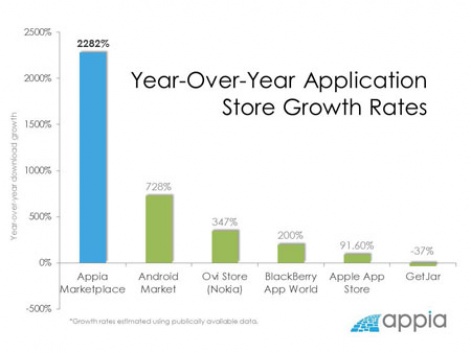 Still, with Appia having a monthly total of 40.2 million app downloads, GetJar at 51.8 million remains larger by volume, and Nokia, RIM, Android and Apple are obviously all substantial bigger.

Additionally, Appia points to other metrics to highlight its performance.

"With the rate of downloads on Appia's open app marketplace now standing at more than 40 million per month, Appia has quickly emerged as one of the industry's largest app stores," said Jud Bowman, Appia's CEO.

"Our ability to drive revenue and significant downloads for our community of 32,000 developer partners is unparalleled in the industry."

Overall, Appia hosts 140,000 applications across Android, iOS, BlackBerry, Java, Windows and Symbian, and says it's generated over $400 million in gross revenue via its marketplace.

It recently launched a pay-per-download marketplace, which has delivered over 2.5 million sponsored app downloads for 30 partners including Amazon, Priceline and Cupid.com.

Developers can find out more about the Appia Marketplace here.

Appia secures $10 million from Venrock in latest funding round