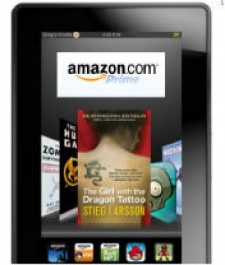 December 15th, 2011 - 10:09pm
By Matt Sakuraoka-Gilman
Considering 2011 had previously been defined as a year that demonstrated the only tablet people wanted was an iPad, it's a revelation that it's ending with an explosion of interest in an Android device.

Still, despite the combination of its $199 price point and Amazon's retail muscle, the fact that 1 million Kindle devices are currently being sold on a weekly basis for the past three weeks - is a surprise.

But let's not get too ahead of ourselves as that number includes all Kindles, including the sub-$100 e-readers.

Amazon doesn't break out specific device sales figures, but does confirm that the Kindle Fire - still only available in the US - is the most gifted and bestselling device across Amazon.com, and has been since its launch.

Fuel to the fire

"It's the bestselling product across all of Amazon for 11 straight weeks, we've already sold millions of units, and we're building millions more to meet the high demand. In fact, demand is accelerating  Kindle Fire sales increased week over week for each of the past three weeks.

"People are buying Kindle Fire because it's a simple, fully-integrated service that makes it easy to do the things they love  watch movies, read books and magazines, listen to music, download apps, play games, and surf the web.

"Our family of Kindle e-ink readers are close behind Kindle Fire on the Amazon.com bestseller list. Customers continue to report preferring their Kindle e-reader for long-form reading, and in fact we've seen many customers buy two Kindles  both a Kindle Fire and a Kindle or Kindle Touch  this holiday season."

Increased demand for Kindle Fires in the build up to Christmas had seen Amazon up its initial shipping volume to 5 million units, whilst researchers have claimed that many consumers have been put off an iPad purchase in the advent of this new device.

The Kindle fire is rumoured to be due for a UK release in January 2012.