DeNA highlights its Android-first policy as it charts Marvel: War of Heroes' success

November 7th, 2012 - 08:31am
By Jon Jordan, Contributing Editor
As is often the case when companies release their financials, there are some interesting titbits to be gained from the notes contextualising DeNA's Q2 FY12 figures.

One concerns how the company looks to deploy games in what is an increasingly complex global cross-platform situation.

As we considered recently in The Charticle, Android is now the lead platform for Mobage games, as its more flexible operating environment enables companies to easily tweak gameplay and monetisation.

Only once a game has 'secured high ranking on the top grossing chart', does DeNA looks to proactively deploy on iOS and Android with 'active promotion'.

When it comes to actual titles, DeNA's big hit to-date - in Japan and the rest of the world - has been the Cygames' developed Rage of Bahamut.

For example, it's been the main driver of the $30 million DeNA generated outside of Japan during the past three months.

However, as this graph shows, new release Marvel: War of Heroes (also developed by Cygames) has launched better, at least in terms of its rise up US top grossing chart positions. 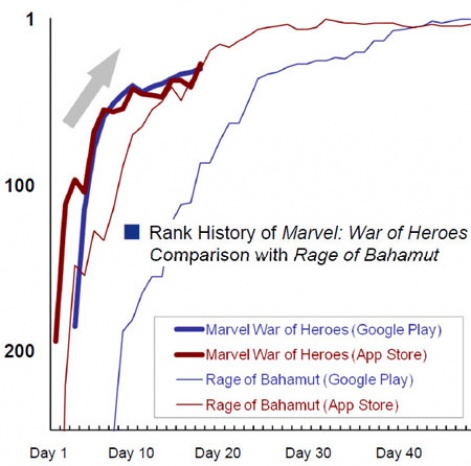 It's also worth discussing how DeNA views the types of games it releases, in terms of their development technology.

Most simple are the browser-based HTML5 titles, such as Marvel: War of Heroes and Rage of Bahamut.

These are very limited in terms of graphical quality and the depth of gameplay interaction, which is why the technology is used for card-based battling games.

DeNA is looking to build up this part of its business, with internally developed games such as HellFire and those from secondparty deals such as Legend of Cavalry, which is being developed with Chinese publisher NetDragon.

And there's the still mysterious FPS coming out of DeNA Sweden.

A Skype-like service initially for Japan, DeNA hopes to build it up and hence direct users to its other services including Mobage.

It seems like a strange move, given the status of the Microsoft-owned Skype in the west, but combining DeNA's $725 million cash reserves, and its status in Japan and parts of Asia, it's likely worth the attempt.