Mobile games are the future of an interconnected world but only if you innovate, says Robert Tercek 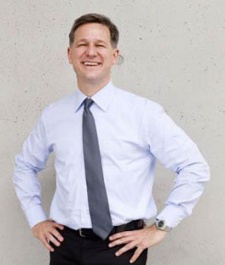 Robert Tercek is one of the world’s most prolific creators of interactive content. He has created breakthrough entertainment experiences on every digital platform, including satellite television, game consoles, broadband Internet, interactive television and mobile networks. His expertise spans television, telecommunications and software.

Robert Tercek, one of the industry's leading mobile executives with over 22 years of experience, delivered a bold talk at the Mobile Games Forum 2014 that predicted the smartphone will act as the centrepiece for an increasingly interconnected society.

Citing amongst a number of things the Nest thermostat, Smart Cities, Fitbit and Android-powered point-and-shoots, Tercek described the smartphone as "the ignition key" of the internet things and the tool with which we will connect to the world around us.

Mobile gaming: the heart of the internet of things

And, in good news for developers, Tercek believes that mobile games could be the key to converting the concept of an interconnected society into a reality - not marketers

"I think the move towards the union of the digital and real world means that there are unique opportunities for game developers to make the move work for users. While marketing companies can do it in their own way, it's likely to be hamfisted and cumbersome, whereas games developers lure people in with fun and know how to turn them from passive to active," he said.

But while Tercek believes that mobile games companies have a role to play in transforming the experience of everything from shopping to watching sports, developers need to be proactive to achieve that goal.

"I think a lot of people who are focused on imitating and chasing or following the market are thinking too small. They need to think bigger: there are some amazing challenges happening if you begin to think outside the phone"

That comment formed part of a larger critique of the habits of a certain class of developer who Tercek were doing little more than turning a quick exploitative buck.

"People are desperate to break through and all they do is copy the game and we now have these grifters coming in." Picking out ex-Pocket Gamer now Guardian writer Stuart Dredge out of the crowd for praise, for his work uncovering children's games like Snoopy's Village and Hello Kitty, Tercek called that behavior an "ugly part" of the industry and admonished developers for providing warnings that most children are unlikely to read or truly understand.

It wasn't only exploitative IAP that Tercek identified as bad practice. He referred to the phenomenon of developers lazily reskinning Supercell's Clash of Clans as the "Clash of Clones" before summing up his overall point about the prospects of those companies with the single withering statement

"If your business model rips off four-year-old or rips off Supercell then you're unlikely to be successful".

Rise of the franchise

That however remained one of the few criticisms of the mobile games industry as a whole, as Tercek took the opportunity to demonstrate just how the industry had progressed.

What we're seeing is that developers are moving away from making single games to producing franchises.

Embarking on a brief history of mobile gaming by looking at the likes of Snake in 1997, the GPS-driven Botfighter title of 2004 and 2013's Ridiculous Fishing, Tercek showed how the developments in mobile have enabled the rise of franchises.

"What we're seeing is that developers are moving away from making single games to producing franchises" Tercek said.

"Plants vs Zombies 2 came too late, was based on a paid model, moved to free-to-play and didn't fare too well. But it was a sequel and it's becoming more common to see sustainable franchises are starting to come out and they're powerhouses staying at the top of the charts."

And, according to Tercek, that's good for the player.

"If you're a player playing this game it's a constantly expanding experience as developers add levels and levels of games"; something which means that many mobile games have a longer life-span and deliver constant experiences to players.

Look to the future

That last point ultimately summed up much of what Tercek was talking about. While there were some points of criticism for the industry to take on board, it was really a call to arms to the mobile industry to achieve the potential it has.

Showing slides of the number of mobile phones used to record Barack Obama's inaugural dance early on in his presentation, Tercek's talk was all about showing how mobile handsets are forming ever important and personal parts of our lives.

Game developers who are able to help those devices bridge the gap to the increasing opportunities of the connected societies could well reap the benefits in the long run.

Now's the time to sign up to our Appstore for Android, recommends Amazon Reply
Robert Tercek
Hey George, thanks for covering my presentation today. I am glad that you got it so accurately. I covered a lot of topics in a short amount of time.

I hope I didn't offend any game developers. My point wasn't to criticize them but rather to encourage them to be a bit more ambitious and visionary. There are some exciting new developments happening outside of the mobile game business in wearables and IoT, and these opportunities are ripe for games.