Gunning for the ultraportables 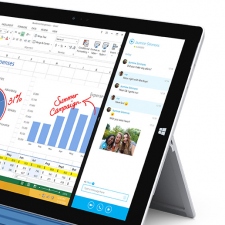 Microsoft has unveiled the third iteration of its Surface line of tablets at a press event in New York City.

Described by Surface VP Panos Panay as "the tablet that can replace your laptop", the new slate starts at $799 ( around £475) and weighs just under two pounds, or 800g, without an optional keyboard.

The Surface Pro 3 boasts a 12-inch screen and sports an upgraded kickstand that supports a 150 degree viewing angle. More impressively, it'll be powered by the "latest" Intel Core i7 processors.

Unfortunately, these processors still require a fan to cool them - but Microsoft's tweaked the Surface Pro 3's chassis to remove the ridge this necessitated in earlier models.

Aiming for the apple

While Panay said the Surface "can replace your laptop", an undercurrent of expected anti-Apple saber-rattling ran throughout the presentation.

In revealing the Surface Pro 3's weight, for example, Panay used the MacBook Air as a frame of consumer reference and weighed the two devices on a scale.

The juxtaposition of the Surface Pro 3 against ultraportable laptops like the Air could help it find a market in the months ahead as the tablet has historically struggled against Apple's cheaper iPad and a fleet of inexpensive Android tablets.

Pre-orders for the Surface Pro 3 begin on Wednesday 21 May and Surface Pro 3 Core i5 models will be available starting 20 June in the US and Canada.

Additional configurations should launch during the month of August, when Microsoft also plans to make the Surface Pro 3 available to 26 countries outside of the US.