Still a nascent market, but there are now over 600 Apple Watch games

Category is 10 percent of total 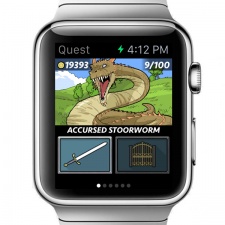 Even its most enthusiastic advocates admit that Apple Watch is currently a work-in-progress.

Presumably this will change as developers get their hands on the new native app SDK and can run code independently rather than requiring the watch to be tethered to an iPhone.

And maybe this will be the opportunity for game developers to shine, albeit at the cost of battery life.

For, according to the latest figures from App Annie, the percentage of Apple Watch apps that are games remains 10 percent.

Tenth of the business

This tallies with the breakdown at launch.

Then App Annie said there were 3,061 Apple Watch apps, of which utilities was the number 1 catergory (12%).

Other research placed games' share of the launch ecosystem at 10 percent.

In comparison, when the iPhone launched, around 25 percent of available apps were games.