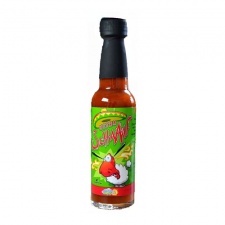 Plushies, hoodies, and keyrings are a staple of any games company worth its brand – but German developer HandyGames has added a bit of spice to the mix.

It’s just released a habanero-based chilli sauce based on its Clouds & Sheep brand.

Available for purchase on eBay and Amazon, the sauce is emblazoned the game’s iconic sheep avatar.

“If you feed this sauce to your sheep, they will get red in the face,” reads the translated Amazon description. “So will you!”

HandyGames CEO Christopher Kassulke is no stranger to experimentation when it comes to his company.

Last year he made no secret of the fact that HandyGames would be embracing wearable games development, despite the fact that the bandwagon had not yet started rolling.

Perhaps, then, chilli sauce is the next thing in branded products. As Kassulke says, “It is for sure something that not many mobile game devs have done until now. I don’t even know if Angry Birds have it!”

Of course, Rovio and its furious feathered empire rely heavily on branded merchandise to remain in the black. In March this year it reported a nine percent drop in overall revenues, largely thanks to the fact that its earnings from consumer products had plummeted from €73.1 million to €41.4 million.