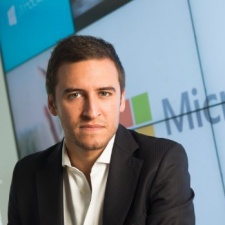 He knows many of the gathered developers, and is evidently passionate about Portugal's growing games scene.

"The head of Xbox tweeted about how excited he is about Game Dev Camp in Portugal, and that's awesome - every journalist in the world will see this... we're here to create awesome games in Portugal," he says.

It's perhaps unexpected for Vicente to bring this up so early, but for a man as influential as Phil Spencer to recognise the achievements of a small country's relatively small scene is understandably an exciting moment.

Even more so given Vicente's following statement.

"This is not a Microsoft event," he says, playing up the importance of Game Dev Camp's partners - including local studios such as Miniclip, Bica Studios, and Nerd Monkeys.

"As a multinational, we feel we have a responsibility to help all of you... we're passionate about empowering creatives and startups."

"This is all about having an event by the community, for the community - and the reason Microsoft supports it is because we're passionate about it."

And indeed, she argues that there's been no better time to be a Portuguese developer: "There are more indie developers in Portugal than ever before, and more funding."

She refers to Bica Studios, who received investment from a Portugal Ventures - apparently unheard of previously for a game developer in the country.

However, while there's a real sense of Portuguese community at the conference, this year's Game Dev Camp is more international than ever, with speakers including King's Matthew Buxton in attendance.

Adding to the international theme, the Seattle-based, half-Norweigan, half-Finnish Petri Wilhelmsen, Graphics Evangelist at Microsoft, takes the stage next.

Discoverability for smaller devs is a big part of Wilhelmsen's presentation, as he discusses Windows' personalised recommendations system, and the fact that apps can be promoted on a user's lock screen.

Another of his big focuses is the unification of the Windows development platform, which allows developers to make games across mobile, desktop, holographic, and more.

"You have one platform to develop on, and one package to develop across all of these devices," he says.

Vicente now introduces Nuno Folhadela of the aforementioned Bica Studios, to show the kind of growth and ambition that's currently going on in the country.

"We need to make not just games, but games studios," he finishes.

Representatives from a hanful of other studios also talk for a few minutes, and they all have one thing in common: none of them are wholly motivated by their own success, and all are concerned for the health of the Portuguese industry as a whole.

Ricardo Flores of B5 Studios sums up this attitude by paying tribute to the work of studios who have now fallen by the wayside.

"We want to do games as a business, and we want to see games as a product. We want to help other indies see their games where they deserve to be - on the top," he says.

There was presence from the biggest Lisbon studio too, with Marius Manolache of Miniclip also talking briefly. The Lisbon studio is responsible for 8-Ball Pool, on of Miniclip's flagship mobile and web titles.

"Miniclip Portugal is the biggest studio in Portugal, obviously," he joked, "Setting up a game development studio in Lisbon was key to our success."

"You may be wondering how big 8-Ball Pool is - just imagine everyone in Portugal playing the game on mobile every day. We have 10 million daily active users."

"We don't want Game Dev Camp to be something that happens once a year and then we don't talk again until next year," says Vicente, returning to conclude the keynote.

"Standfast Interactive is an investment company who wil be coming here in the next few weeks for pitching opportunities," he reveals. "This is huge, they are willing to fund the Portuguese ecosystem."

There's a great deal of hope in the room as the keynote ends, and the Portuguese industry has come out in full force to give a strong account of itself in a presentation so brimming with speakers and announcements that it overruns.

We will be covering more interesting talks as the day progresses.