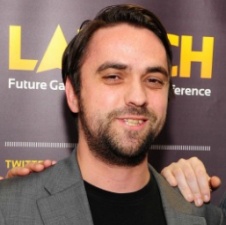 Speaking at the TIGA Smartphone and Tablet Conference in London, Andreas Firnigl - Company Director at Nosebleed Interactive - is refreshingly open about his weaknesses as well as his strengths.

Firnigl began his development career in the console space, and the first game he worked on was the little-remembered Big Mutha Truckers, the name of which still inspires a ripple of guilty laughter.

But after being made redundant, he returned to Newcastle to set up Nosebleed Interactive on a shoestring budget, a developer that started out by winning a Sony competition to develop for the ill-fated PlayStation Mobile platform.

This was Nosebleed's way into console development, which was always the plan for its first project.

"Why did we choose console? Three years ago I was skint, and the mobile market was already quite huge - I thought it would be difficult to get into that with no business experience," he says.

This fits with one of Firnigl's key strategies, and perhaps his bigggest piece of advice: "create relationships early, but with strategic planning... I had some contacts at Sony so we kind of knew how they worked."

This paid off for Firnigl and his team when their work with PlayStation Mobile led to being given the chance to develop a full-fat Vita exclusive.

This was The Hungry Horde, a game tailor-made for the Vita's various inputs that was also featured on PlayStation Plus - Sony's Netflix-esque service which gives paying subscribers access to certain free games.

"This got us a lot of downloads," Firnigl says. However, more important to Nosebleed was that a PlayStation Plus feature meant that Sony threw its marketing weight behind the game.

"Sony has a little more marketing budget than us," he grins.

Having user acquisition and marketing effectively covered by Sony - often the biggest challenges for a small indie studio on mobile - Nosebleed's decision to opt for Vita over mobile was effectively justified.

However, now on its second project, Nosebleed is entering uncharted territory by going multiplatform across many consoles and mobile platforms.

And fittingly, the game is a hybrid of forms that seems to marry console-esque hardcore with the kind of compulsive casual experience massive on mobile.

Provisionally titled Vostok Inc., the game's pitched as a twin-stick shooter crossed with an AdVenture Capitalist-style experience in which you somewhat passively watch numbers go up and up.

Of course getting the latter to work on mobile isn't an issue with so many having already laid the framework, but twin-stick shooter - while also having been done on mobile plenty - remains a trickier proposition.

"Controls are a major concern for action games, especially as we've never worked with mobile controls before," says Firnigl.

Nosebleed's approach is to make the twin-stick controls customisable, with player able to tweak dead zones, use tilt, and generally choose how they want to play.

However, when it comes to the monetisation side of things, Firnigl is unashamedly naive, and no decisions have been made yet.

He discusses the difficulty of gaining traction with premium, but also notes that "in the mind of console players, being F2P on mobile devalues a paid experience."

Firnigl himself is a self-described "frustrated hardcore gamer," and he confesses that Vostok Inc. on mobile is an "experiment" - and one that he seems far from sure will be successful.

Many would advise against such an approach - and indeed, the speaker who took the stage directly beforehand warned against such blind faith in game design without market awareness, the dissonance of which Firnigl finds amusing.

However, developing for PlayStation Mobile might not have made Firnigl a millionaire, but it certainly opened doors. Perhaps getting a foot in the door of mobile development will, too.

Games dev in the modern age: UCL and TIGA team up to school indies