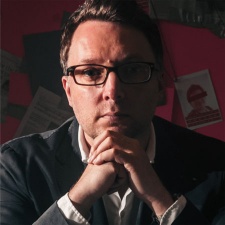 A slightly vague statistic, but Steve Stopps, Director of Lumo Developments, makes an interesting point - while "we're taught success is money", as he says, those who can say they work in the industry are in a unique position to many people in the country.

He broke out the usual reference to Maslow's hierarchy of needs, although made the point that "the biggest lie that we're all told" is that we need money to be creative and happy.

But for Lumo Developments they have the attitude that "we love creating," although Stopps does say that "20% of our business is concerned about the money", which is his role in the company.

Rather than worry about money, each member of the 5-person strong team has an equal share in the company, an idea that, while it may seem foolhardy, Stopps fully believes in because, as he says, "I trust everyone."

But "money is important" - "if we don't get money through the front door, it all stops," he says, but Lumo Developments has been lucky enough to work with investors "who leave us alone" and make games that bring in enough revenue to keep the lights on.

Ultimately, however, Stopps says to "define your own success based on what you want."

Video: How Pollen VC can accelerate your cashflow