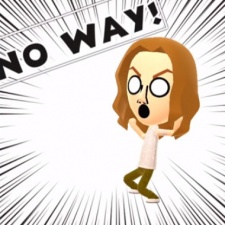 Miitomo, the first app produced from Nintendo and DeNA's five game partnership, has shown a significant decline in downloads and retention metrics, according to SurveyMonkey.

Despite a strong start in April – with an estimated $1 million made in its first month – weekly download numbers nosedived after around two weeks.

The number of active users has also dropped significantly, with DAUs down 74% and MAUs down around 50%.

The social experience also has a weekly churn rate of 48% across both iOS and Android, which is a bad sign given it needs players to stay active to remain enjoyable for new players to join.

As to why interest has dropped so dramatically, SurveyMonkey points to user feedback that suggests the core loop is too simple and slow.

This wasn't helped by the initial industry-wide interest in Nintendo's flirst mobile experience: something which quickly evapourated in a deluge of questions about your favourite bread and favourite childhood toy.

Obviously, it's a trend Nintendo and DeNA will have to take seriously as they prepare to launch F2P mobile games based on Animal Crossing and Fire Emblem later in 2016.

You can read the full report on the SurveyMonkey website.

Nintendo’s Japan-first approach for Fire Emblem Heroes pays off as it nets $2.9 million on its first day